A version of this was published in The Santa Fe New Mexican
January 23, 2009

Hank Williams, country music’s greatest star, died 56 years ago this month. But if you thought you had heard everything he ever recorded during his short but crazily influential career, think again.

That’s right. The Complete Hank Williams, that 10-disc collection released more than a decade ago by Mercury Nashville (and which I still hope to get one day), isn’t really complete. Late last year, Time-Life Records brought forth Hank Williams: The Unreleased Recordings, a three-disc box of sessions he did for a morning radio show on WSM in Nashville in the early 1950s. It was one of those archetypal country-music radio shows sponsored by a flour company, Mother’s Best Flour, which you can hear Hank occasionally plug in these songs (“Hey, good lookin’, if you’ve got anything cookin’, just be sure you’re cookin’ it with Mother’s Best Flour”).

He usually did the show live with his Drifting Cowboys band. But if he was touring, he and the band would prerecord their 15-minute segment. This material, which came into the possession of Hank’s daughter, Jett, makes up the new box set. Apparently the project was wrapped up in some kind of legal battle for several years. I guess they could have titled it “Music the Lawyers Tried to Kill.”

When I first heard about this collection, I was afraid it might sound like a bootleg. That’s definitely not the case. The sound quality is mostly excellent, despite a couple of scratchy spots here and there — far better than most old country radio-show recordings I’ve heard.

But what I really like is the wide variety of songs he does. There’s only a smattering of Hank hits here — “I’m So Lonesome I Could Cry,” “Cold Cold Heart,” “I Can’t Help It (If I’m Still in Love With You),” “Wedding Bells,” “Mind Your Own Business,” and “Hey, Good Lookin’.” Rather than concentrate on his well-known catalog, The Unreleased Recordings treats listeners to a host of songs we’ve never heard before — at least not by Hank.

There are lots of gospel songs here, lots of songs he picked up from contemporaries like Roy Acuff, Ernest Tubb, and Moon Mullican. Hank sings “On Top of Old Smoky,” which he performs with soul I never knew the old chestnut had. There’s even a take on “When the Saints Go Marching In,” complete with bluegrass-style harmonies from the Drifting Cowboys.

And there’s an original Hank Williams train song I’d never heard before, “California Zephyr.” “Wrote this here a few days ago,” he says, introducing the tune. It’s not as moving as “(I Heard That) Lonesome Whistle,” but it’s always nice to discover a new Hank number. There’s even a local reference: “She leaves the City of the Angels, headin’ for old Santa Fe.”

Hank dips deep into hoary folk obscurity with the spooky hymn “Lonely Tombs.” The Stanley Brothers recorded a version of this tune, which goes back to the British Isles. “Every voice from the tomb seemed to whisper and say, ‘Living man, you must soon follow me.’”

I also like that Hank sings “Blue Eyes Cryin’ in the Rain” using some long-forgotten lyrics by composer Fred Rose that Willie Nelson left out of his hit version nearly a quarter century later. “Now my hair has turned to silver/All my life I’ve loved in vain/I can see her star in heaven/Blue eyes cryin’ in the rain.”

Speaking of country giants who would follow Williams, in Hank’s version of the “The Old Country Church” in this collection, you can hear what might be the birth of the classic Johnny Cash chunka-chunka sound.

Hank updates his Luke the Drifter morality tale, “Pictures From Life’s Other Side” (a song that actually dates back to the 1890s), adding a verse about a soldier fighting in Korea: “In a foxhole frozen and homesick, he’s fighting for us, as you know.” 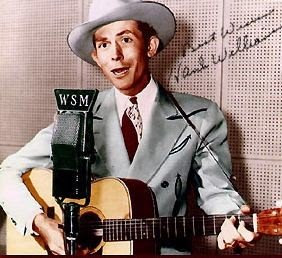 Speaking of life’s other side, there are several horrifying tragedy songs that some hipsters might take as high camp. “At the First Fall of Snow” is a song about a dead child — a common motif in early country music. Even more over the top is “The Blind Child’s Prayer.” It’s about a blind girl who resents her father’s remarrying: “Oh, father, tonight they say you are to wed another bride/That you will hold her in your arms, where my dear mother died. ... Father, do you think she’ll love your blind and helpless child?”

Spoiler alert: It’s another dead child song. This is followed by an upbeat gospel song about going to heaven that includes the refrain “I’ll have a new body, I’ll have a new life.”

But there’s humor, too. In a spoken interlude in the mournful “If I Didn’t Love You,” sideman Louie Buck says, “Aw, honey child, if I didn’t love you, would I buy you that washtub and that washboard and tell you you could keep half of what you made off it?”

Naturally, the collection ends with a hymn — one invoking a striking image, half Book of Revelation half John Ford. It’s called “The Pale Horse and His Rider.” Hank sings it as if he’s the last cowboy on Earth, corralling stray souls.

I love the radio setting of these performances. The studio audience on several tracks sounds far rowdier than they should on an early morning show. (But these were prerecorded, so the music could have been performed at any time.) And sometimes the announcers add real country charm, as when one says, “That’s a mighty fine song for you boys to send out, especially to all our shut-in friends this morning.”

Indeed, music like this would be a comfort to shut-ins and shut-outs alike.