A version of this was published in The Santa Fe New Mexican
September 4, 2009

In a showdown dubbed “Rumble in the Jungle,” two African American giants met in the ring in a land called Zaire in the mid-’70s. Such a momentous clash of titans needed a soundtrack. Thus was born a music festival called Zaire ’74, promoted alongside the fight in Kinshasa, the capital of Zaire (now known as the Democratic Republic of Congo).

Godfather of Soul James Brown would headline the three-day music show. Also on the bill were B.B. King, Celia Cruz with the Fania All-Stars, Bill Withers, Big Black, Miriam Makeba, TPOK Jazz, L’Orchestre Afrisa, The Spinners, The Crusaders, and Sister Sledge. (Funny, no one asked Screamin’ Jay Hawkins to sing “Feast of the Mau Mau” for the Congolese audience)

The Rumble was the subject of the 1996 documentary When We Were Kings. Jeffrey Levy-Hinte, who was an editor on that film, took leftover footage of the music festival to make a music documentary, only recently released, called Soul Power, now showing at CCA Cinematheque.

For the record, sports fans, Muhammad Ali, who makes several appearances throughout this film, won the boxing match and regained the heavyweight title, beating future electric-grill hawker George Foreman — who is never shown and is rarely mentioned in the documentary. 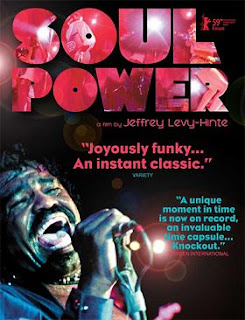 The fight had to be delayed for six weeks because Foreman got injured during training. But the music festival, for various reasons, including the bands’ scheduling conflicts, went on as planned.
Ali seemed to be everywhere the musicians were, at least before they took the stage. At one point, he seems jealous of all the attention the singers are getting, making it clear in the interview that he, not these musicians, is openly challenging the white power structure.
“I have to lead the way,” he says. “God has made me bigger than all entertainers in America. God has made me bigger than all entertainers in the world.”

During his time onstage, James Brown gives Ali a run for his money. Sporting a thick ’70s-style mustache, Brown lives up to the announcer’s promise that he would “make your liver quiver” and “your bladder splatter.” The man was such an influence on African musicians, and his performance in Zaire was as significant as it was sizzling.
But Mr. Dynamite isn’t the only powerhouse who took the stage in Zaire. Cruz basically steals the show with her All-Stars, which included bandleader and flute man Johnny Pacheco and Ray Barretto, who played the conga in the Congo. You know Cruz is going to be great onstage, because early in the film you see her jamming with members of her band on the jet on the way to Africa.

Withers, one of the most underrated soul stars of the early ’70s, plays acoustic guitar on a little-known tune called “Hope She’ll Be Happier.” Makeba does a song that brought her fame in this country in the ’60s, “Qongqothwane” — which “the colonists” call “the Click Song,” she says — in her native Xhosa language.

Perhaps the most touching scene is when B.B. King is coming off the stage and expressing doubts about his performance. In the movie we see a perfectly good version of “The Thrill Is Gone.” But B.B. just wasn’t sure. “I hope it didn’t sound too bad,” he says backstage. “I enjoyed parts of it.” Maybe he felt awkward being on the same bill with soul stars like Brown.
Maybe there were lingering nightmares about his tour with fellow Mississippian Sam Cooke back in the early ’60s, in which he was heckled by some of Cooke’s younger fans, who considered King’s music to be too old-fashioned and gutbucket.

One of the best musical performances is by an unnamed African group with two singers playing a slow, soulful tune on a traffic island in downtown Kinshasa. The guitarist happily picks away at a battered electric instrument. A decade later, African guitar music would find a huge audience in this country. It seems ridiculous — maybe a little, well, imperialistic — that nobody bothers to tell us who these talented folks are.

Soul Power has a few ironic moments. In some of Ali’s rants, he holds Zaire up as an example of a happy and free society. He’s talking about a land run by dictator Mobutu Sese Seko, described by The New York Times as “a corrupt and brutal strongman with a touch of theatrical flair and unusual fashion sense.”
The film is not without its flaws. About half the movie is taken up with behind-the-scenes kvetching about all the problems involved— economic, logistical, physical, political — in putting on a show this big. I’m not sure why, but this has become an obligatory part of just about every music-festival movie since Woodstock.
Maybe it’s an ego thing in which the money men and guys with the clipboards get their little moment of stardom. Or maybe the festival producers use this as a way to scold the audience, as if to say, “We worked hard to bring you this. You’d better appreciate it.”
Well, thank you very much. It indeed was a fine show, but as a music fan I’d much rather this time be filled with performances from that fine show — or at least some fun backstage shenanigans — than with a bunch of sweaty guys building a stage and a group of self-important clowns barking orders on walkie-talkies.
In a press release for the movie, Levy-Hinte said his original intention was to create a set of concert DVDs from the hours of footage from the show. I hope he follows through.