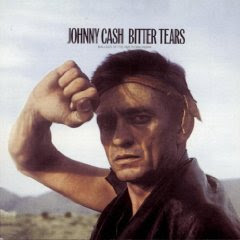 * Johnny Cash Sings The Ballads Of The American Indian: Bitter Tears. I had this on LP when I was a kid and I've been meaning to buy a CD for years. But I was inspired to download the album after reading this article in Salon about Cash, Ira Hayes, Peter LaFarge, Bitter Tears, a clueless music industry (thank God that's all been cleared up by 2009) and Tricky Dick.
It's a sad album. It's one of the angriest albums released on a major label in the '60s -- especially the early '60s. It's all about broken promises, broken lives, damned rivers and damned peoples and Goddamn you, Great White Father, anyway.
And yet, there's a sweet ray in humor -- albeit black humor in one song: Cash's "tribute" to General George Armstrong Whazisname. "I can tell you, Buster, I ain't a fan of Custer/And the general he don't ride well any more."
And hey, isn't the melody of "Drums" a lot like that of "Running Bear"? 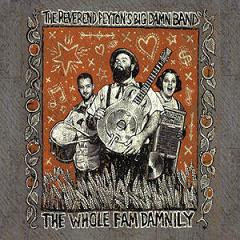 * The Whole Fam Damnily by The Reverend Peyton's Big Damn Band. This trio from Indiana is a damn family -- The Rev plays slide guitar, the Mrs. plays washboard and the brother plays drums.
And hey, they got Jon Langford to do the album cover!
It's a hopped-up homage to raw country blues, a pig sloppin;, snake-stompin' romp. You might hear a little Scott H. Biram in here, maybe some Legendary Shack Shakers, definitely some Southern Culture on the Skids influence.
But the lyrics, at least in several songs, are modern. True, the message of "Wal-mart Killed the Country Store" has been spouted by many a coffee house whiner. But "Your Cousin's on Cops" -- reportedly based on true Peyton family history -- is one of a kind.

And here's some good news, especially for those of us who missed them when they first played Santa Fe several months ago: Rev. Peyton and the family is playing the Santa Fe Brewing Company on Sunday, Jan. 31. I missed him last time he was here so I'm hoping to make it this time. 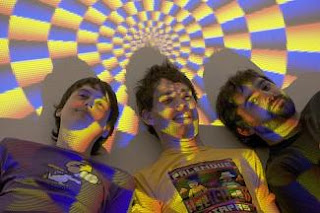 * Fall Be Kind by Animal Collective. Sometimes I have these weird time-travel fantasies about going back to the late 50s or early '60s and playing some of my favorite music for the folks. In some, my better angels prevail. I want to play stuff like, say, Rev. Peyton to assure people that good American roots music will survive in the 21st Century.
But sometimes my darker angels have the upper hand and I want to fuck with them. I'd play them Animal Collective and tell them that the aliens had invaded the Earth. And that they'd won.
Of course, the befuddled earthlings of the past probably would think I was talking about aliens who worshiped Brian Wilson.

Just a few months after releasing their album Merriweather Post Pavilion comes this 5-song EP. There's nothing as sweet and euphoric as "My Girls" from MPP. But just when you're floating along the cosmic plane on the opening song "Graze" and think you might you have it figured out ... ZAP! Of of the sudden you're in the middle of a weird Teutonic, cartoonic flute solo. For some reason it brings back strange memories of this coin-operated puppet show they used to have in arcades. The aliens have lost, and, at least for a few moments, the puppets have won. 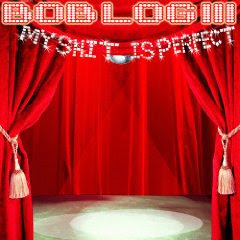 * My Shit Is Perfect by Bob Log III Here's one of the most fun one-man bands out there.

This is just good down-home stomping blues with Log’s trademark distorted vocals (he performs in a motorcycle helmet making him look like some demented Power Ranger) and some scattered electronic embellishments.

I reviewed this album in a recent Terrell's Tune-up. If you missed my words of wisdom, check it HERE 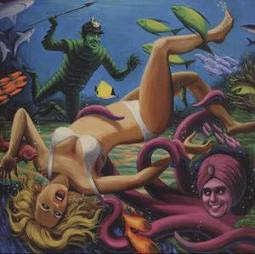 * Invisible Girl by The King Khan & BBQ Show. What distinguishes this dynamic duo from all the other punk/blues bashing two-man outfits out there is its anchor in raw doo-wop. Your basic punk-rock roar is colored by some Ruben & The Jets/Sha Na Na/rama-lama-ding-dong silliness, but the music is based on some seriously pretty melodies and occasional sweet harmonies.

My favorites are the ones where Mark "BBQ" Sultan’s high voice soars, such as “I’ll Be Loving You” and “Tryin’.” Sometimes he sounds like a more ragged Sam Cooke.

I also reviewed this album in that recent Terrell's Tune-up. You can see the whole shebang HERE. 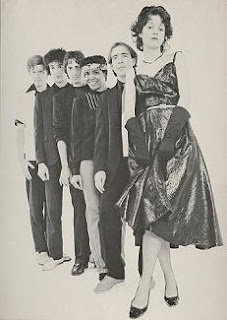 * 6 tracks I didn't already have from Wasn't Tomorrow Wonderful by The Waitresses. Recently discovering Tin Huey, which included Chris Butler, the songwriter and guitarist who conceived of The Waitresses re-sparked my interest in this long defunct Ohio band.
I was fortunate enough to get to see The Waitresses in Pasadena in May 1982. (I was out in California promoting Picnic Time for Potatoheads with my pals Alec and Rich, who owned the Potatohead van. Besides seeing The Waitresses, the most we got accomplished in the L.A. area was getting kicked out of the Capitol Records Building and getting propositioned by hookers at a Malibu sushi joint.)
I'd never heard of The Waitresses until a few days before, but KROQ was playing "No Guilt" continuously -- and "I Know What Boys Like" slightly less frequently. And unlike most songs played continuously on the radio, I didn't start hating it. In fact I still like it more every time I hear it. And I still grin every time Patty Donahue says "Sucker!" near the end of "I Know What Boys Like."
(We dropped a copy of Potatoheads by KROQ, but I don't think they ever played it.)
About the songs off this, The Waitress' 1982 debut, are on the CD The Best of The Waitresses, which I've had for years. Nice to see the full album available. 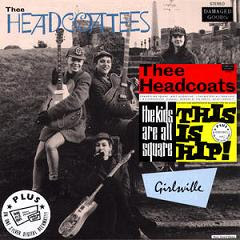 * Nine tracks from The Kids Are All Square - This Is Hip|Girlsville by Thee Headcoats and Thee Headcoatees. Billy Childish can get more use from basic Kingsmen/Kinks/Bo Diddley riffs than George Washington Carver could for the peanut. Thee Headcoats, his band from the late '80s until the early part of this century perhaps was his best.
The songs here include, not one, not two, not three, but four songs dealing with the American frontier -- an irreverent yang to the righteous ying of Johnny Cash's "Bitter Tears," though Cash's "Custer" would fit in with these songs.
There's Thee Headcoatees' "Davy Crockett," (which I didn't download because I already had it from another compilation) set to the tune of "Farmer John." In "Cowboys Are Square" Wild Billy takes the side of the Indians. "Pocahontas Was Her Name" is far cooler than any song used in the Disney movie. Then, heading up to frozen north, "Nanook of the North" is yet another fantasy about falling in love with a Native girl. ("I killed a pack of wolves with my frost-bitten hands/Just to prove to her I was a mighty mighty man.") It would be a good companion with Hank Thompson's "Squaws Along the Yukon."
But not all the songs are hysterically historical. One of my favorites is "Ballad of the Fogbound Pinhead." It's just a simple put-down song. "He never ever knew right from wrong/Never knew the words to a Headcoats song."
This basically is a two-album combo. I didn't have enough credits this period to get Girlsville, the second album, which is by Thee Headcoatees (Thee Headcoats' ladies auxiliary). I'll pick that up next week when my account recharges.
at December 05, 2009