A version of this was published in The Santa Fe New Mexican
February 19, 2010


The whole band only played one instrument — the human voice.

I'm talking about The Persuasions, the undisputed kings of a cappella soul. Armed only with their vocal cords, these guys, who first got together in New York City more than 40 years ago, made some magical sounds covering doo-wop, gospel, show tunes, rock 'n' roll, and, of course, sweet '60s soul.

On their latest release, The Persuasions: Live at McCabe's Guitar Shop, they do songs made famous by Sam Cooke, Nat King Cole, Elvis Presley, The Drifters, The Oak Ridge Boys, The Mills Brothers, and Frank Zappa, and songs written by Arlen and Mercer, Leiber and Stoller, Thomas Dorsey, Kurt Weill, and Bobby Bare. 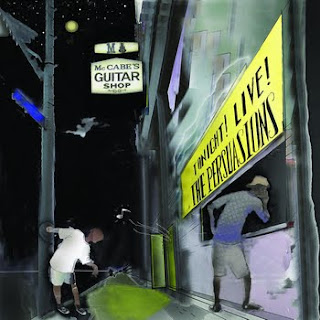 But it all sounds like The Persuasions to me. And that's a good thing.

This album was recorded 12 years ago in Santa Monica. (Local note: the night before they recorded this show, The Persuasions drove all night from Silver City. "It's wonderful," one of the group members says.)

After a rousing "I Woke Up in Love This Morning," The Persuasions launch into one of the greatest songs they've ever sung — Cooke's "Chain Gang," which kicked off their wonderful second album (the first Persuasions album I ever owned), 1971's We Came to Play. With no disrespect to Cooke's original, The Persuasions do this more convincingly than he did. While none of the individual Persuasions could match Cooke's vocals (few if any mortals can), without the strings and slick arrangement of Cooke's classic record, The Persuasions sound as if they really could be on a chain gang working on some highway or byway.

This is followed by "Looking for an Echo," which originally appeared on The Persuasions' 1977 album, Chirpin'. Though they didn't write it, they altered the lyrics a bit so it tells their story. "We used to practice in a subway, in a lobby, or a hall/Even in the doorway, singing doo-wops to the wall./And if we went to a party, and they wouldn't let us sing/We'd lock ourselves in the bathroom, and nobody could get in"
Two of my favorites on this album are Nat King Cole hits — "Mona Lisa" (with lead vocals by Jayotis Washington and bassman Jimmy Hayes) and "Ramblin' Rose." Lead singer Jerry Lawson's finest moment in this show might have been "500 Miles Away From Home." Shortly before this show, his home had been destroyed by a flood. He sings the refrain "away from home, away from home, cold and tired and all alone" with real urgency.

Gospel music was always one of The Persuasions' major strengths. They do some fine versions of "Peace in the Valley," "Come on and Save Me," "I Have but One Desire," and Weill's "Oh Heavenly Salvation." So it comes as a real sucker punch when they do Frank Zappa's "The Meek Shall Inherit Nothing," a cynical look at church hypocrisy and superstition right between "When Jesus Comes" and "Building a Home" ("Some take the bible/For what it's worth/When it says that the meek/Shall inherit the Earth/Well, I heard that some sheik/Has bought New Jersey last week/'n you suckers ain't getting nothing.")
True fact: The Persuasions and Zappa went back a long way. He signed the group to his Bizarre label, on which they released their first album, Acappella, in 1970. The group paid tribute to him in 2000 with an all-Zappa covers album called Frankly A Cappella.)

But they sound heavenly, even when singing Zappa's hilarious blasphemy. If there is a kingdom come, I bet Zappa and Mark Twain are up there listening to The Persuasions.

I'm not sure why Live at McCabe's Guitar Shop took so long to release. Perhaps it had something to do with Lawson leaving the group in 2003 and moving to Arizona (where he hooked up with a group called Talk of The Town.) But it really doesn't matter. This is timeless music that sounds good in any decade. 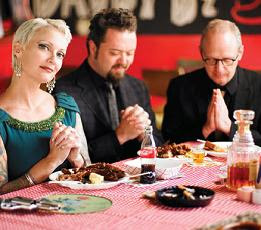 * The Filthy South Sessions by Bernadette Seacrest & Her Provocateurs. Back in the early part of this century, Seacrest, then with a band called The Yes Men, was a fixture on the Albuquerque and Santa Fe circuit, playing smoky, sultry, sexy torch songs and cocktail jazz. The group broke up by the end of 2005 and Seacrest grew discouraged with the music biz in general. She flew south. But she reemerged in Atlanta with a new band, The Provocateurs, and she sounds as smoky, sultry, and sexy as ever.

All the songs on this album are written by her guitarist, Charles Williams. (The other Provocateur is Kris Dale, whose main instrument is double bass.) The tunes are all well suited for Seacrest's voice and persona, and a few really stand out.

"Empty Streets" is slow and ominous with its refrain, "I love you, daddy, but put down that gun" — it sounds like it could be straight out of some film noir soundtrack. "G-d's Been Drinking" — which starts out with a sweet, a cappella "Amazing Grace" — is bound to invite comparisons with Tom Waits ("When the locusts start to flyin' I started thinkin'/What would happen if God started drinkin'").

"The Rain Has Rained Away" hints at Seacrest's rockabilly roots (an early band of hers was The Long Goners), with a cool steel-guitar solo by Dale.

Most of the tracks feature the basic band, but the up-tempo "Where Does it Hurt," which has guest drums and organ, is a treat, as is "Trashcan Lens," which features a horn section and brake-drum percussion.