A version of this was published in The Santa Fe New Mexican
March 18, 2011


A preacher in a small Southern town has a double life. He goes astray and his life and the lives of everyone around him suffer for it. Tragedy follows. (“The reverend had his wife done in by a guy I knew in high school.”) 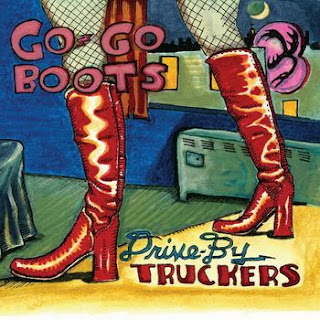 This is the theme of a couple of Patterson Hood songs on Go-Go Boots, the latest album by the Drive-By Truckers. It’s a story he told before in “The Wig He Made Her Wear” on the Truckers’ previous work, The Big To-Do. “Wig” is based on the true story of Mary Winkler, who was found guilty of voluntary man slaughter for killing her allegedly abusive husband, the Rev. Matthew Winkler, in 2006, at the couple’s home in Tennessee.

The spiritual offsprings of that twisted tale are the new album’s title song and “The Fireplace Poker.” These are apparently fictional accounts inspired by the 1988 murder-for-hire case in which Elizabeth Dorlene Sennett, wife of the Rev. Charles Sennett, was stabbed and beaten in her home on Coon Dog Cemetery Road (I’m not making that up!) in Colbert County, Alabama.

The reverend committed suicide, authorities say, soon after being identified as a suspect. One of the contract killers, John Forrest Parker, was executed last year. “This was a wild case,” former Colbert County Sheriff Buddy Aldridge told an Alabama newspaper at the time.

The Sennett-murder songs are delightfully disturbing. In “Go-Go Boots,” there is a slow and bluesy setup in which Hood introduces the Cadillac-driving preacher, his mistress Missy, whose sexy footwear apparently did for this preacher what Mary Winkler’s wig and other accessories did for her late husband. And then there’s the son, driving his Camaro and working crappy jobs, the rage building inside as rumors about his mother’s death start to swirl.

The murder is only hinted at in “Go-Go Boots”: “He met these guys who didn’t mind getting dirty/He was a pillar and his alibi was sturdy.”

But the lyrics of “The Fireplace Poker” read almost like a police detective’s field notes. It’s a meandering epic sung matter-of-factly by Hood over a tense, sturdy beat. In the song, the preacher’s wife is stabbed and left for dead by the hired killer. But it’s the preacher who finishes the job with 15 whacks of a fireplace poker.

Also, in the song, the official story of the preacher’s suicide is questioned. The preacher’s son brings him home, apparently from questioning at the police station. Hood asks, “Was he alone when he died?/ Don’t call the son for questioning, that bullet was deserved./ Better call it suicide. Justice has been served.’”

In a video on the Truckers’ website, Hood explains that he’s fascinated when “people in positions of authority ... whether it’s a preacher or policeman, you know, people who are supposed to be standing up for the morally upright things, commit horrific crimes.” He says that he has an unfinished book and an unfinished screenplay based on the murder that inspired these tunes.

“In another life I might have been one of those people that write, you know, noir books or something, or direct noir movies,” Hood says in the video. “But instead I play in a noir band.”

“Go-Go Boots” and “The Fireplace Poker” weigh in at nearly 14 minutes. They’re like a movie within the album, but they’re not the only tracks that back up Hood’s contention that the Truckers are a noir band.

While the music here isn’t quite as rocked out as in most of DBT’s previous albums — there are lots of sweet soul grooves and a couple of honky-tonkers — the stories told are some of the most intense since The Dirty South, their 2004 album, which is still my favorite.

There’s the gripping “Used to Be a Cop,” a seven-minute Hood tale of a former officer who sounds like a walking powder keg. He’s a guy who was beaten by his father, grazed by a bullet in the line of duty, and divorced by a wife who thought he was crazy for all his fidgeting and pacing.

His car was repossessed, and he carries deep resentment about having to pay for a house, “but that bitch lives in it now.” Police work was the only thing he was good at, but he lost his badge because of “my temper and the shakes.” Mike Cooley’s guitar snarls and boils, and you keep thinking some atrocity is awaiting in the next verse.

“Ray’s Automatic Weapon” is another Hood song. This one is about a Vietnam veteran, not a criminal. The narrator is haunted by recurring nightmares and has a gnawing fear that something crazy might happen. Or maybe it already did. He begs his war buddy Ray to take back the gun he left with the narrator 40 years ago. “The things that I’ve been shooting at are getting all too real.”

Not all the songs here are blood and guts. The baritone-voiced Cooley sings “The Weakest Man,” an upbeat country tune you could easily imagine Conway Twitty singing. Cooley’s “Pulaski” is a sweet, cautionary tale of a small-town Tennessee girl who longs for the nightlife of Los Angeles. She comes to an unspecified tragic end.

And there’s not one, but two songs written by the late soul man Eddie Hinton. My favorite is “Where’s Eddie?” an emotional ballad co- written by funky Donnie Fritts and sung by bass player Shonna Tucker.

Go-Go Boots doesn’t hold together quite as well as last year’s The Big To-Do. My initial impression is that there’s more filler on Boots. But don’t worry. You’ll get your money’s worth on the songs I mentioned. I can’t think of many other bands these days that provide this much meat per platter.

Here's the interview with Patterson Hood I mentioned above: