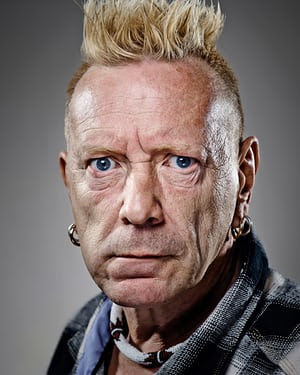 I've never met John Lydon, but I have a feeling that the artist formerly known as Johnny Rotten would hate this.

But today is his 62nd birthday, so I can't resist.

I was looking for a bluegrass Pistols cover, just naturally assuming that there was a "Pickin' On the Sex Pistols" album. I mean there are Pickin' on Creed and Pickin' on Modest Mouse and Pickin' on Poison albums, so what are the Pickin' On people waiting for?

The closest I found was this one by Hayseed Dixie. (I'm not impressed.)

This is a French group I liked in the late '80s. They're called Les Negresses Vertes and they covered this Pistols classic.

This one's really dumb. Anyone remember Green Jello -- or didn't they have to change ther name to "Green Jelly? They got some MTV play in the early '90s with their rap-metal re-telling of the 3 Little Pigs.

"Anarchy in Bedrock" is even worse.

Martin Clive Atkins was a drummer for Lydon's Public Image Ltd. in the late '70s and early 80's. He also did time with Nine Inch Nails, Ministry, Pigface and other "industrial" groups. Around the turn of the century Atkins, recording under the name Opium Jukebox, released an entire album of Bhangra versions of Pistols songs. This is one of them: