Whoa! What Happened to April?

As many of you noticed, this blog came to no a screeching halt in early April.

That's because of a sudden medical crisis that kicked my ass and put me in the hospital for nearly a month.

But don't worry, nothing terminal ... and I finally got out of the hospital earlier this week. I won't be going back to work or doing my radio shows for a few weeks but I'm going to try to kickstart this stupid blog.

Let's start by posting belatedly the Terrell's Tune-Up column I wrote right before I went to der krankenhaus and was published at the outset of my stay.


A version of this was published in The Santa Fe New Mexican
April 6, 2018 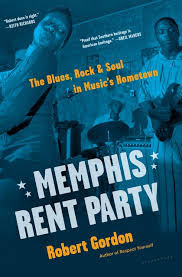 Mick Jagger wanted to delay the Stones’ set until after sundown, thinking, mistakenly, that the evening air would be cooler — “and his makeup wouldn’t run,” according to Gordon’s account of the show. So the Stones’ organization went across town to rustle up an eighty-year-old local country bluesman named Furry Lewis to play before the Stones went on.

Lewis started recording in the late 1920s — songs like “Judge Harsh Blues” (“They ’rest me for murder, I ain’t harmed a man/Women hollerin’ murderer, Lord I ain’t raised my hand”) and “Kassie Jones,” an alternative spelling for legendary railroad man Casey Jones.

In the preface to his latest book, Memphis Rent Party: The Blues, Rock & Soul in Music’s Hometown (Bloomsbury USA, 2018), Gordon writes that the ancient bluesman’s set was life-changing:

“Furry’s playing was unlike anything I could have anticipated; the still, small, voice after the raging storms. His rhythms were slow, his songs full of space, his notes floated in the air. … There was an immediacy to his art that the Stones’ big production could never match.”

Teenage Gordon not only started seeking out Furry Lewis records — he was determined to get to know the singer himself. Lewis actually performed a lunchtime show at Gordon’s high school. Talking to him after the show, Lewis actually invited the kid to visit — just told him to bring along a pint of bourbon and a raw Wendy’s hamburger.

Gordon writes, “it was harder for me to get a ride to that part of town than it was to buy Furry’s pint of Ten High bourbon.”

But his frequent visits to Lewis’ duplex grew into an obsession, not only with Lewis but the blues in general — and soon, with other types of music and other musicians as well.

Gordon published his first book, It Came From Memphis, in 1995. Like Memphis Rent Party, Gordon’s debut was an overview of the city, focusing mostly on lesser-known Memphis characters who helped make the music unique — iconoclast musicians like Jim Dickinson, Alex Chilton, and Tav Falco.

Since then, Gordon has done a couple of books about Elvis Presley, others on Jerry Lee Lewis and Muddy Waters, and one about Stax Records. This one basically is a love letter to Memphis and some of the characters who inhabit Bluff City. The book consists of re-published magazine and newspaper articles, liner notes for albums, and previously unpublished writings.

There’s a chapter on Junior Kimbrough, a Hill Country bluesman, who was at the forefront of the Fat Possum Records explosion in the 1990s. “He was a big man, like a football player, with an air of quiet violence, simmering sexuality, and raucous good times,” Gordon writes. “His eyes were big, like they’d seen things we wouldn’t believe, and though he was welcoming, he also seemed to have a live 220 current running through him. He was Junior Kimbrough.”

Gordon writes about Jerry McGill, a real-life outlaw country singer. McGill, working under a bunch of fake names, was a fugitive of the law while working as Waylon Jennings’ road manager and rhythm guitarist. “Jerry McGill was Memphis’ homegrown Lash LaRue, our own personal outlaw,” Gordon writes. “McGill traded Lash’s black whip for a .44 Magnum but kept the black hat, kited checks, attempted murder, robbed a liquor store and some banks, and stayed on the lam.” Gordon writes that “while he was someone I may not have wanted in my house, by the end he was someone I was glad was in my life.

One of the book’s most poignant chapters is the one about James Carr, a soul singer best known for his rendition of “The Dark End of the Street.” He also had a hit with the song “You Got My Mind Messed Up.” There’s more than a little irony there. Carr has a well-documented history of mental illness. Gordon includes part of a 1992 interview in which Carr expounds on his belief that someone had “switched” his body with someone else.

“I felt as helpless hearing this story then as I do reading the transcript now,” Gordon writes. “He needed more help than I could give him … He needed healthcare, dependable doctors, and reliable medications.” Carr died in 2001.

There is even a little investigative reporting here. In a chapter called “Hellhound on the Money Trail” — originally published as a 1991 article in LA Weekly — Gordon dives into why it took years for the heirs of bluesman Robert Johnson to see any royalties from a Johnson boxed set. Basically, it was a battle of two hucksters, each claiming to represent different Johnson descendants.

“In 1998, seven years after this piece was published, Mississippi courts determined that Robert Johnson’s heir was Claud Johnson, a son not born of Johnson’s wives. Claud was in his seventies and working as a gravel-truck driver in Crystal Springs, Mississippi. His wife ran a BBQ stand. ... When he moved to a nicer house, he kept his gravel truck, a reminder of his life’s hard work.”

In addition to the book, there also is a “soundtrack” album with songs by Furry Lewis, Junior Kimbrough, Charlie Feathers, Jerry McGill, Jim Dickinson, Alex Chilton, and others. It’s worth it if only for Dickinson’s crazy “I’d Love to Be a Hippie” and Jerry Lee Lewis’ wild, rocking “Harbor Lights.”