This coming Saturday is one of America's greatest obscure holidays: Batman Day!

And what better way to celebrate the life and work of the Caped Crusader than the music of one of his most iconic devotees, Herman Poole "Sonny" Blount, better known in this sector of the cosmos as Sun Ra.

Sun Ra and Batman? It's true. According to WFMU's Beware of the Blog, (which thankfully is still online, despite having stopped adding new content  few years ago):

In 1966, a toy company in Newark, New Jersey released a children's record called Batman and Robin to cash in on the popular Adam West TV series of the same name. The music on the LP was credited to "The Sensational Guitars of Dan and Dale," but in fact the band was one of the greatest uncredited session combos of all time, including the core of Sun Ra's Arkestra and Al Kooper's Blues Project. To keep the music licensing fees to a minimum, all the tracks were based on public domain items like Chopin's Polonaise Op. 53, the horn theme from Tchaikovsky's Fifth Symphony and the love theme from Romeo and Juliet, and generic rock riffs.

("Dan" and "Dale," according to the Sounds of the Universe website were blues guitarist Danny Kalb and Steve Katz (who a few years later would be a founding member of Blood, Sweat & Tears). Arkestra sax men Marshall Allen and John Gilmore also played on the record. Sun Ra, his cosmic self, played organ, as did Al Kooper. The album was produced by Tom Wilson, who also produced works by Bob Dylan, The Mothers of Invention, The Velvet Underground and Simon & Garfunkel.

As I wrote a few years ago, "It's jazzy, kinda cheesy, mostly instrumental rock — with song titles referring to the Dynamic Duo and the villains they fought." And the album still is available on Amazon and iTunes.

Here is one of my favorites from Dan and Dale:

But that's not the only time Sun Ra met Batman.

Jazzman Ra loved rhythm & blues, doo-wop and soul music. In fact his first recordings were with R & B wild man Wynonie Harris. He and the Arkestra backed up bluesman (and Sun Ra's brother-in-law) Lacy Gibson on his 1969 single. "I Am Gonna Unmask The Batman."

There are two versions of the tune on the Norton Records compilation Rocket Ship Rock, (my review of that crazy compilation is HERE). Below is the shorter version. The longer one can be heard HERE.

But Sun Ra's fascination with Batman wasn't over. In the mid 1970s, he performed a radically different version of "Unmask the Batman" with Arkestra member James Jacson on vocals. This performance wasn't released until 2018, when it appeared on an album called Of Abstract Dreams.

According to the All About Jazz website, that album consist of:

an unreleased radio broadcast from Pennsylvania dating from either 1974 or 1975. That the exact location—stated as "probably" WXPN FM Studios, University of Pennsylvania"—and even the year are a matter of doubt might seem odd at first, but in fact many of Sun Ra's extensive recordings weren't properly documented.

Paul Griffiths' liner notes describe Jacson's vocals as "a cross between Louis Armstrong and Screamin' Jay Hawkins", but All About Jazz notes "others may prefer to think Animal from The Muppet Show, which would be entirely in tune with this raucously fun workout."

Have a safe and happy Batman Day! 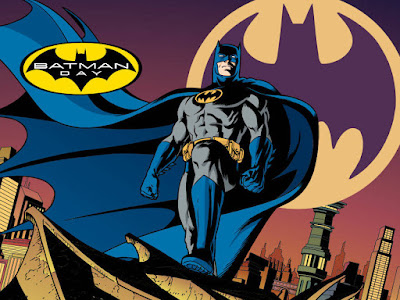