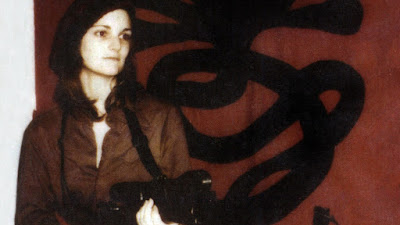 On this day in 1974 years ago, members of a violent, ragtag bunch of self-styled revolutionaries called the Symbionese Liberation Army kidnapped Patricia Campbell Hearst, the 19-year-old granddaughter of William Randolph Hearst, setting off a tragic and bizarre series of events that turned into something of a bad action flick crossed with a twisted soap opera when Patty later announced to the world she was renaming herself "Tania" and was joining her captors and started taking part in bank robberies.

So here's a musical salute, to sweet Patty, starting with this delightful ditty from the late great Warren Zevon. It's the first time -- only time? -- I heard her name in a song. (This version is from Late Night with David Letterman in 2002, about a year before Zevon died.) I've always wondered if Patty Heart

Back in 1987, Camper Van Beethoven released the mock-ode "Tania" on their album Our Beloved Revolutionary Sweetheart.
A couple of years before Camper's tune, The Misfits also released a Patty song on their compilation  Legacy of Brutality. It was called "She."
Though her actually name is never mentioned, the lyrics, by Glenn Danzig, made it obvious who the song was about:
She walked out with empty arms
Machine gun in her hand
She is good and she is bad
No one understands

She walked in in silence
Never spoke a word
She's got a rich daddy
She's her daddy's girl
This video consists of actual security camera footage of Tania in action:
UPDATED! Thanks to Tommy T. who reminded me of this song a few hours after I originally posted. It's not about Patty, but two loveable gals named Judy and Jackie who "went down to Frisco,
joined the SLA ..."
This last video, featuring L7's song in John Waters' movie Serial Mom, doesn't actually have anything to do with Patty, except that she appeared in that movie, as well as several other Waters movies. She struck up a lifelong friendship with the filmmaker that's actually kind of touching. In Serial Mom she portrayed a juror who is murdered by Kathleen Turner for the offense of wearing white after Labor Day.