*Some Kinda Nut - Missing Links Volume 3 by Link Wray. This is a collection of rare Link Wray tracks both as a solo artist and sideman. "Little Red Riding Hood & The Wolf" by Bunker Hill. The greatest, the craziest rock 'n' soul hit you never heard. *Quicksand/Cradlesnakes by Califone. If Wilco is The Beatles of roots-based experimental rock, then Califone is ... I dunno, The Who? *Bee Hives by Broken Social Scene. I downloaded this because a friend recently turned me on to BSS' self-titled album. I like that one better than Bee Hives, which seems slower and more meandering. *Young Liars and New Health Rock by TV on the Radio . I just got into this band (See my recent Tuneup on Return to Cookie Mountain) Better late than never! This band's like a crazy mix of Fishbone and the Fall held hostage in a magic Radio Shack. These are a couple of EPs from TV's early years (2003-2004). Not quite as developed as Cookie Mountain, but they definitely were on their way. *The Singles by Spacemen 3. This is a band whose name I've seen under influences of an awful lot of pyscho/garage/guitar-fuzz/noise bands I like. However, I'd never really been into the Spacemen that much, so I thought I'd give 'em a try. Cool and spacey. Some of it rocks, some like "Ecstacy Symphony" are lengthy drones. That one and others are around 10 minutes long. Warning: This album barely fits on one disc. Burning it on iTunes I had to set it on 0 seconds between songs to make it all fit. 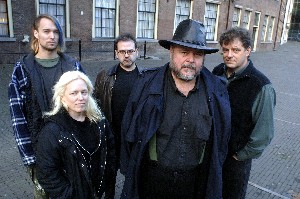 *Why I Remix Women by Pere Ubu. I would have titled this "Why I Hate Remix Albums." I couldn't not to get this because I liked Why I Hate Women so much. But my advise is to stick with the original.

* The first seven cuts from Vol. 2 America's Most Colorful Hillbilly Band by The Maddox Brothers and Rose. I had seven tracks left over, so I decided to get a start on the second column. This family band had more fun than hillbillies out to be allowed to have. (I've just downloaded th remaining 23 tracks for my march selections.)

* Bloodshot Records Honky-Tonk Compilation What a deal! This currently is free to eMusic members. I already had most of these 11 tracks on the original albums by artists like Wayne "The Train" Hancock, Robbie Fulks, the Old 97s, former Santa Fe resident Rex Hobart, Paul Burch, etc. but it makes for a dandy sampler.
at February 23, 2007