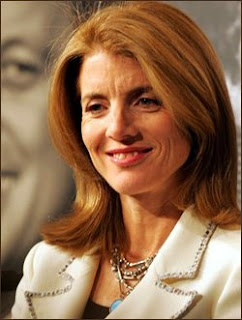 The event is being billed as a "debate watch party," Alfred Johnson, Obama's campaign director for Northern New Mexico, told me late Wednesday — although she's scheduled to appear at the Airport Road eatery at 4 p.m., while the debate starts at 7 p.m.

Kennedy, who co-chaired Obama's vice-presidential selection team, also has scheduled a debate-watching fundraising event and reception at the home of Debbie Fleischaker. The cost: $1,000 per person. Later that evening, Kennedy is scheduled to attend a dinner at the Santa Fe home of Paul Bardacke and Lisa Enfield. Cost for that event is $10,000 per person.

More details about the PC's event should be available today, Johnson said. PC's is located at 4220 Airport Road.

UPDATE: (Thursday afternoon) The Obama campaign now is saying the event is at 4:30 p.m. It's being billed as a "debate watch party and volunteer training." Kennedy is scheduled to be there until 5:45 pm.
at September 25, 2008