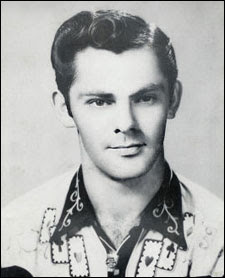 * Wild Side of Life: Rare and Unissued Recordings and Honky Tonk Kind: Rare and Unissued Recordings Vol. 2 by Charlie Feathers. Mississippi-born Feathers never quite made it big back during the heyday of rockabilly. But he was there when it happened, working as a session cat at Sun Studios before splitting off, even co-writing an Elvis tune, "I Forgot to Remember to Forget."

These are two of three collections Norton Records released earlier this year. For some reason the third, Long Time Ago, isn't available on eMusic, at least not yet.

Lots of these, in fact most of these are lo-fi tracks that sound like demos or studio jamming. Feathers, who started off as a country singer, was never afraid to show the billy side of rockabilly, so there's plenty of country classics on these collections -- "Folsom Prison Blues," (there's versions of this on both collections here), "Cold Cold Heart," "Release Me," "Send Me the Pillow You Dream On," "Am I That Easy to Forget" and of course "Wild Side of Life." Feathers puts his own crazy stamp on these, so some are barely recognizable. In fact "Release Me" on Wild Side is a duet with blues great Junior Kimbrough., who on Honky Tonk Kind also joins Feathers on "Feel Good Again," (which also was available on a Fat Possum compilation a few years ago.)

Elvis' ghost pops up now again. "I Can't Seem to Remember to Forget" for instance is full of plays on the titles of Presley's Sun Records tunes. 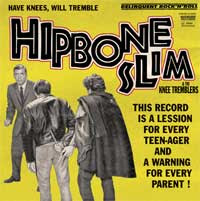 * Have Knees, Will Tremble by Hipbone Slim & The Knee Tremblers. A Voodoo Rhythm classic. The cover warns "This record is a lesson for every teen-ager and a warning for every parent. Speaking as a parent, I just wish more of the children were into music like this.

This is a British psychobilly trio led by a guy who calls himself "Sir Bald Diddley" (as if "Hipbone Slim weren't nickname enough.) The drummer is Bruce "Bash" Brand, who is a veteran of several Billy Childish bands. John "Lard" Gibbs plays stand-up bass.

My favorite tune here, "What Do You Look Like" features a guest appearance by the ever-sexy Holly Golightly. 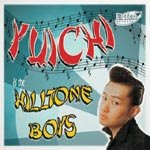 * Yuichi & The Hilltone Boys. Yup, I guess I'm on a rockabilly kick on eMusic this month.

This is a new album from a Japanese rockabilly unit -- released on a label from Spain no less. It started 50 years ago, but rockabilly’s still in the process of conquering the world.

Yuichi's voice reminds me some of Big Sandy's. Except I don't think Sandy could sing in Japanese like Yuichi does on the sweet ballad "Sayonara."

These guys go raw country with the Hank-like weeper, complete with steel and fiddles, "She Isn't Around Anymore." And they get greasier than greasy on the 50's-style slow-dancer "Hurt."

And yes, they can tear it up. "Flyin' Saucer" could almost be considered a love song for Billy Lee Riley. "Countin' the Years" and "Thunder" are a broken-English rockabilly nightmares that are nothing short of irresistible. Yuichi also does a credible version of Roy Orbison's "Oobie Doobie." 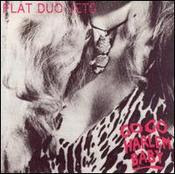 * Go Go Harlem Baby by Flat Duo Jets. An early '90s gem from the dynamic duo. I couldn't resist a record with one of my favorite crime-jazz instrumentals, "Harlem Nocturn" and one of my favorite Everly Brothers weepers, "Don't Blame Me."

There's also some cool Flat Duo versions of old greasy pop ballads "You Belong to Me" ande "Apple Blossom Time," as well as a downright Lynchian spookhouse piano bar tune, "Ask me How I Live."
And yes, some cool rockers like "Rock House" and the immortal "Froggy Went a Courtin'." * 100 Percent Fortified Zydeco by Buckwheat Zydeco. The day after I interviewed Buckwheat on KSFR and heard him play at the Thirsty Ear Festival I decided I needed more Stanley Dural in my collection. This 1983 record is the only complete Buckwheat album eMusic has, but it's a good one.

Buckwheat had a whole horn section on this album. There's lots of blues, lots of mixing zydeco with funk (like the tune "Jasperoux," some fun covers -- the old R&B hit "I Need Your Lovin' Every Day" and Mungo Jerry's "In the Summertime" plus an obligatory "Jole Blon," here called "Buck's Nouvelle Jolie Blon."

* Four songs from Introducing Los Peyotes This is a hopped-up garage band from Argentina, who last month released this album on London's Dirty Water Records. I'll hold off on a full review until next month when I download the rest.

I would have downloaded five tracks from Los Peyotes, but I spent one of my last ones on ...

* "Louie Louie" by Richard Berry. Before the Kingsmen, before Paul Revere & The Raiders, long before Iggy Pop, there was this weird R&B number from one of the unsung, or at least undersung greats. I found this on an album called The Roots of Van Morrison, which mainly consists of blues standards I already have on other collections. I didn't have this one though.