A version of this was published in The Santa Fe New Mexican
September 1, 2008

“Fernando is a friend and a good friend,” Pearce told me in a telephone interview. “He’s done a lot of good for the Republican Party in Bernalillo County. But the comments were very unfortunate. I feel like it’s affecting the party. I called him and told him there’s no way he should continue as county chairman.”

Pearce joins U.S. Sen. Pete Domenici, state GOP chairman Allen Weh and others who have called for C de Baca to step down. 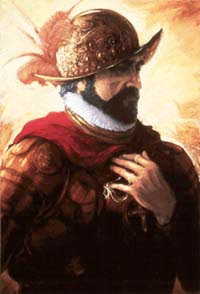 In a taped interview with the BBC (courtesy KSFR) , C de Baca said older Hispanics won’t support Obama “primarily because there is a strong feeling that African Americans during the civil-rights movement took advantage, full advantage, of all the benefits and programs that the government offered, that were supposed to be offered to all minorities. But we were left behind. We were left sucking air. And we resented that ever since the ’60s, and I don’t see how a black president is going to change that.”

C de Baca has since claimed his comments were taken out of context. He said he was referring to views held by older Hispanics.

Pearce said Wednesday that he met Saturday morning with C de Baca about the controversy. “My understanding then is that he would be stepping down.” Since then, however, the Bernalillo County Republican Party executive board gave C de Baca a vote of confidence.

“We boast New Mexico’s long-standing minority-majority status because of our immense pride in our vibrant diversity. Chairman C de Baca’s comments are not only demeaning to the people and pride of New Mexico, they perpetuate and validate racism. These words are unacceptable for any official who represents our great state.”

Although C de Baca probably is the first to bring up the conquistador/slave argument, others have talked about the reluctance of some Hispanics, especially older people, to support Obama. In an interview at the Democratic National Convention in Denver last month, state labor leader Christine Trujillo — an Obama supporter — told me the candidate needs to do more to reach out to Hispanics. She said while younger members of her family enthusiastically favor Obama, older family members are having a difficult time accepting him.

However, recent polls show Obama doing better with Hispanics in New Mexico than John Kerry did in 2004. The North Carolina-based Public Policy Polling did a poll of 1,037 likely voters in New Mexico late last week that showed Obama winning 59 percent of the Hispanic vote compared with John McCain’s 35 percent (margin of error 3 percent). A SurveyUSA poll taken a couple of days before shows Obama winning the Hispanic vote by a margin of 69 percent to 28 percent (671 adults interviewed, margin of error 3.9 percent).

Where the heck is the guv? Gov. Bill Richardson might have the “best job in the world” as governor of New Mexico, but he sure hasn’t been here very much during the political season. What’s frustrating for reporters is that often we don’t find out about Richardson’s out-of-state trips until we see items in Google News alerts. The governor’s press office has basically stopped releasing weekly public schedules for Richardson. Generally, there is no advance warning of political trips, despite our requests.

The attitude of the office seems to be that it’s nobody’s business when the governor is in the state or not.

After campaigning for Obama in Colorado this weekend, he appeared Monday in Reading and Bethlehem, Pa. In Bethlehem, he spoke to the Council of Spanish Speaking Organizations.

And, speaking of Fernando C de Baca, one Obama volunteer there told Richardson that some Democrats are reluctant to vote for Obama because of his race, according to an article in The Morning Call, an Allentown, Pa., paper. “In conversations with some of these people, it seems undecided is just an excuse for what their real hesitation is for voting for Sen. Obama,” Melba Tolliver told Richardson.

Richardson, according to The Morning Call, said, “Is there going to be a certain percent who is not going to support Obama because of his race? Yes, probably. But you know I think this has become a very tolerant nation.”

The next day, Richardson was in New Hampshire, where in January he saw his own presidential candidacy die when he finished a distant fourth in the Democratic primary. He had speaking engagements in Manchester, Nashua and Laconia, according to news accounts.

At least we know, from an account in PolitickerNH.com, that Richardson is scheduled to be in Mississippi on Friday for the presidential debate.

“My role is going to be what’s called a spinner. I will declare, don’t write this down, John, Obama the victor before the debate starts,” Richardson said. “John” is political reporter John DiStaso of the New Hampshire Union Leader in Manchester, who was covering the speech.

Richardson was in New Mexico on Wednesday. He had a news conference at Isleta Pueblo to announce the recipients of $2.8 million in capital outlay funding to help restore and improve the health of rivers in the state.
at September 24, 2008