A version of this was published in The Santa Fe New Mexican
February 20, 2009

Bet you didn't know that one of the original Rolling Stones used to live in Taos.

No, not Mick or Keith or any of those other limeys who popped up in the '60s. I'm talking about Andy Anderson, the founder of a first-generation rockabilly band by that name, which sprang out of Clarksdale, Mississippi, in the mid-1950s; he sang songs like "Johnny Valentine" and "Tough, Tough, Tough." He never sold a fraction of the records the latter-day Stones did. But Mick Jagger can't say he helped build a New Mexico state fish hatchery, now can he?

I recently received a package of CDs with a personal note from Andy. "Many of these songs were written when we lived in Taos. Many great memories from Santa Fe and the area." He went on to write that he lived in Taos between 1976 and 1988.

The CDs he sent are all titled One Man's Rock & Roll. My favorite is subtitled The Early Years 1955-1965. The other two, which also include some dang good tracks, are more recent recordings. They are subtitled Anthology Vol. 1 and Anthology Vol. 2: Party Down.

Like many ascended masters of the blues, Anderson grew up on a Mississippi plantation. One big difference: he wasn't a sharecropper. His parents owned the plantation. The liner notes for The Early Years say that as a child he actually went to live shows featuring the likes of Howlin' Wolf, John Lee Hooker, and B.B. King. 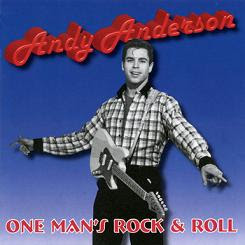 Anderson formed The Rolling Stones during his college years at Mississippi State University. A 2005 interview with The Clarion-Ledger in Jackson, Mississippi, quotes the singer talking about his early years with The Stones: "Nobody drank. We were clean livin' rock 'n' rollers, good old boys who just wanted to make music and took everything for granted. We didn't want a million dollars, we wanted more gigs."

Clean living? That doesn't sound like the Rolling Stones most of us know.

The group cut a lot of records, even some at Sun Studio with Jack Clement as producer. Alas, those songs have yet to be released. The Early Years, however, is a great sampler of Anderson's Rolling Stones years and of his work with his next band, The Dawn Breakers (from 1959 on).

Though you never hear them on oldies radio, Anderson had some extremely cool tunes. There's "Johnny Valentine" — three versions of which are included in this collection — a song about a rockin' Romeo who "goes out with the girls all of the time/He's in love with 'em all; he goes out every night/He's got about a hundred; he likes to hold 'em tight." "I-I-I Love You" is simple and greasier than Kookie's comb. And "Tough, Tough, Tough," is a punchy little rocker that lives up to its name.

Unlike the golden gods of rockabilly whose names we all cherish, Anderson had some regional hits, but he never quite caught on. He kept his day job as manager of an electrical- supply store and kept recording through the late '60s. The later songs on The Early Years show Anderson progressing beyond rockabilly, incorporating elements of soul, R & B, and country.

He worked the business end of the music biz too. During a stint in California in the late '60s, he was part of a management company whose clients included Jefferson Airplane, The Seeds, and Canned Heat. Anderson had all but given up on music by the early 1970s. But then he hooked up with a songwriter named J.J. Hettinger and started a band called The Eagle and the Hawk. The group relocated to New Mexico in the mid-'70s — perhaps because they heard our music industry was for the birds.

Not only did Anderson play music in Taos, he also sold real estate. And though he didn't mention it in his note to me, he spent some time in Albuquerque building custom homes. Shortly after moving to Taos, Anderson lost a finger in a mishap with a hydraulic lift. That was the end of The Eagle and the Hawk. Anderson started a construction company called Big Valley Land & Construction.

According to his biography in the Rockabilly Hall of Fame Web site, the company was subcontracted to help build the state fish hatchery near Questa. But Anderson's hard luck continued. "The general contractor on the project went bankrupt," the Web site says. "This cost Andy his profit from the job and forced him to liquidate his company to pay off all of his debts."

By this time, Anderson was doing some gigs and even some recording with local musicians. But he returned to Mississippi by the end of the '80s, reportedly so he could work with hard-core Southern rockers.

The two anthologies are from his post-New Mexico period. While they aren't as much fun as the '50s and '60s recordings on The Early Years, there are some great blues-drenched boogie stompers here. These include "Wichita Watchita Omaha Cowboy," "Red Dog Cider," "Sweet Imogene," and "Damned Old Ford." Then there's "Fuzzy Stuff," which starts out "I went on down to the fabric store." Anderson's voice has gotten rougher and gruffer with age, and it suits these songs well. Never has a trip to the fabric store sounded more fun or nastier.

Unfortunately, too many slow ballads on these albums are sappy. Andy's more convincing as a tough old rocker than an old softie.
at February 20, 2009