A version of this was published in The Santa Fe New Mexican
February 27, 2009

They call themselves “God’s favorite band.” I’m not sure if the god they’re talking about is Dionysus or some jungle deity whose name cannot be spoken.

But even agnostics should be able to appreciate The Asylum Street Spankers, a good-time crew from Texas that has been spreading its gospel of old-timey acoustic sounds, radical politics, reefer madness, dirty jokes, and general wackiness. 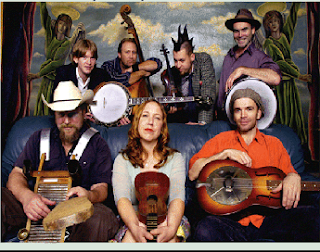 The Spankers have a new — well, pretty new — double live CD, What? And Give Up Show Biz? And they’re coming to Santa Fe. (Actually, according to the Spanker Web site, brassy belter Christina Marrs is on maternity leave, so the upcoming show will be an all-male revue. As the Web site says, “While the lady is with child, the dudes are going wild.”)

For those not familiar with the ASS, this live album, recorded in January 2008 at New York’s Barrow Street Theater, is a good place to start. Show Biz includes tunes spanning the band’s career — dope songs, dirty songs, children’s songs, a political-conspiracy song (“My Baby in the CIA”), and a perfectly lovely version of Harry Nilsson’s “Think About Your Troubles.”
This is one of the only bands I know that would release a record that includes a vaudeville classic like “Everybody Loves My Baby” and a Black Flag cover, “TV Party.” There is also a cool, quick medley of instrumental TV-show themes, including those of The Simpsons, Jeopardy, and Bonanza.

And like Black Flag, the Spankers have a punk-rock heart, despite their strict adherence to a no-electricity credo. Their Betty Boop-ish version of Tampa Red’s “Tight Like That” includes a quick detour to The Jim Carroll Band’s “People Who Died.”

Less successful is the band’s fusion of country music and rap with a song called “Hick Hop.” The Gourds’ version of Snoop Dogg’s “Gin and Juice” set the standard for endeavors like this.

Lots of musicians of any note who’ve been around for a few years have certain songs that they’re sick of but the masses demand. (Ask Loudon Wainwright III about “Dead Skunk” or Ray Wylie Hubbard about “Redneck Mother.”) The Spankers have an answer for this — a less-than-three-minute “Medley of Burned Out Songs.” It’s a fun track, but newcomers to Asylum Street should seek out the full version of “Lee Harvey,” a sympathetic look at the late Mr. Oswald.

A lot of the album consists of between-song stage patter and shaggy-dog tales. Even though this kind of live-album stuff starts to get old after a few listens, the Spankers are better at it than most — mainly because they’re funnier. And some of these throwaway tracks have their own charm. Take the dumb, dirty-minded, a cappella ditty “My Country’s Calling Me,” which sounds like it’s straight from the playground. That reminds me of a weird little song from my own youth that starts out, “There was a miss/Who went to piiiiiiiiiiiiick some flowers” (actually an old high school teacher taught me that one).

In addition to the laffs, the Spankers are memorable because of their musicianship. Even at their silliest, they are, as Tampa Red would say, tight, tight like that.

* American Shadows: The Songs of Moon Mullican by The Cornell Hurd Band. “He was one of the fathers of rock ’n’ roll, kid. Yes, he was.” That’s what Hurd says in the introduction to this album, on which he, his magical band, and guest stars pay tribute to Aubrey Wilson Mullican, a piano-playing Texan best known as a country singer in the 1940s and ’50s.

But Cornell ain’t lying about the rock ’n’ roll. Mullican embraced rockabilly, as “Moon Rocks” and “Seven Nights to Rock” prove. Those songs are included in the tribute, as are his hits like “I’ll Sail My Ship Alone” (sung by Tommy Alverson) and “Cherokee Boogie” (sung by Brad Moore).
Two of my favorites here are duets — “Southern Hospitality” and the mighty pretty “Mighty Pretty Waltz” — by Maryanne Price (former Lickette with Dan Hicks) and Chris O’Connell (ex-Asleep at the Wheel).

And here’s some pretty amazing musical trivia. Mullican recorded a song by none other than the late pimperiffic R & B master Rudy Ray Moore — yes, Dolomite himself — “I’m Mad With You,” sung here by Hurd. “The fact that Moon recorded a Rudy Ray Moore song puts him in a class by himself,” Hurd says in the liner notes. Cornell’s pretty much in a class of his own as well.

Note: After I wrote and submitted this column, Paul Skelton, guitarist for The Cornell Hurd Band died. He was a heck of a picker. His obit is HERE