A version of this was published in The Santa Fe New Mexican
February 13, 2009 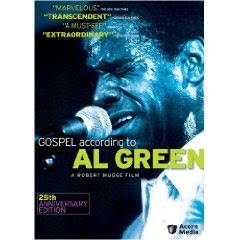 Robert Mugge has been making documentaries about his favorite musicians since the mid-’70s. His first was George Crumb: Voice of the Whale, a portrait of the American avant-garde composer. That was soon followed by a movie about Alabama’s most famous space alien, Sun Ra: A Joyful Noise.

The thing I like best about Mugge docs is that the music is never shortchanged. He often lets an entire song play, allowing the music to speak for itself. And while he gives his subjects lots of leeway to tell their stories, Mugge’s interview segments go straight to the core.

Two long out-of-print Mugge movies from the 1980s about very different titans of American music were recently released on DVD by Acorn Media: Gospel According to Al Green (the 25th-anniversary edition) and Sonny Rollins: Saxophone Colossus.The Green movie is one of the finest musical biographies I’ve ever seen.

It opens with Green in a recording studio, picking a guitar, and playfully toying with a song that mainly consisted of the lyrics, “I love you ... I love you with all my heart.” He grins as he reaches the high notes, subliminally invoking the ghost of Sam Cooke. He makes it look so easy. Viewers can’t help but be mesmerized.

The scene shifts to Bolling Air Force Base in Washington, D.C., where a tuxedo-clad Green is escorted to the stage by military personnel, and with full band and backup chorus, leads the crowd in a hallelujah gospel stomp. After cutting away for an interview segment, we return to the base, with Green putting his stamp on The Impressions’ “People Get Ready.” He works the crowd and brings down the spirit.

In a 2005 interview, Mugge told me that “the sacred-secular conflict clearly represents both the heart and the soul of Al Green. ... This is a film about love, about the connections between soul music and gospel, and about a man who flew too close to the sun, got his eyeballs burned, and has been singing ever since with fire coming out of his mouth.” (Mugge repeats this almost word-for-word in a director-reflections feature on the new DVD.)

The singer’s conflicts between his big-time soul-star lifestyle and his religious upbringing were starting to tear at him by the mid-’70s. Green’s experience with this battle culminated in violence — on a hellish night in 1974 when a spurned girlfriend threw a pot of boiling grits in his face as he was bathing, causing second-degree burns. She then went into a bedroom and shot herself. Following the suicide, Green became an ordained minister. By the end of the ’70s, he had turned his back on secular music.

Mugge told me that his filmed interview with Green was one of the first times Green publicly talked about some of his darker times.

“Some of his longtime musicians were in the control room of his studio, basically standing there with their mouths hanging open,” the director said. “I learned from them afterward that Al had spoken to me of things that, to their knowledge, he had never discussed with anyone. Naturally, the so-called ‘hot-grits incident’ was, for him, the most painful subject for him to address. But I had the sense that he really did want to talk about it that day — to get the matter out on the table, to let people know exactly what had happened, and then to be done with it.”

But Mugge wouldn’t let his movie become a glorified version of VH1’s Behind the Music. Remember, “gospel” means “good news,” and Gospel According to Al Green is the story of a man who has become comfortable with his contradictions. He laughs when talking about crowds of women trying to rip off his clothes in his early days. He does a version of his hit “Let’s Stay Together” with no hint of compromise. (Those who have seen Green’s shows in recent years know he freely mixes his secular hits with his gospel music.)

Toward the end of the movie, Mugge takes us to Green’s Full Gospel Tabernacle church in Memphis, where Green still preaches — and if this film is any indication, gives amazing musical services — most Sundays.

The new DVD features the above-mentioned Mugge interview, plus an audio version of Mugge’s complete interview with Green, some concert excerpts, and more than an hour of an Al Green church service. 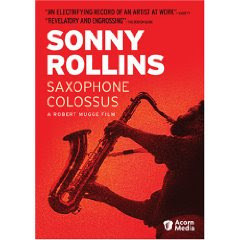 As a film, Sonny Rollins: Saxophone Colossus doesn’t quite measure up to the Green documentary, which was made just a couple of years before. Mugge spends too much time with a trio of near-worshipful jazz critics who don’t shed much light on Rollins’ music. And he spends way too much time on Rollins’ collaboration with the Yomiuri Nippon Symphony in Tokyo.

About the last half of the film deals with the world premiere of the sax man’s Concerto for Tenor Saxophone and Orchestra on May 18, 1986. I guess this is just a little too highfalutin for my taste. I’d much rather watch performances like the 15-minute “G-Man” that opens the movie. Shot at an outdoor concert in upstate New York, this footage — and to a lesser extent the excepts from “Don’t Stop the Carnival,” shot at the same show, that end the film — inspired me to seek out Rollins’ album G-Man, which features some of the performances here.

In general, I’d much rather see and hear Rollins in a red sweater backed by a small combo (Clifton Anderson on trombone, Mark Soskin on piano, bassist Bob Cranshaw, and drummer Marvin Smith) in a park than Sonny all gussied up in a tux with a full orchestra in a concert hall.