OPENING THEME: Buckaroo by Buck Owens & The Buckaroos
Stop the World and Let Me Off by John Doe & The Sadies
Lotta Lotta Women by Robbie Fulks
In the Jailhouse Now by Steve Earle & The V-Roys
Georgia on a Fast Train by Billy Joe Shaver
Living Like a Fool by Chris Darrow
Walk on Out of My Mind by Waylon Jennings
Build Me a House by Kim & The Cabelleros
Turn it On, Turn it On, Turn it On by Tom T. Hall
Up Above My Head by Maria Muldaur & Tracy Nelson

Another Clown/Beans and Make Believe by Mose McCormack
Drink Up and Be Somebody by Merle Haggard
I'll Fix Your Flat Tire, Merle by Pure Prairie League
Up For Air by John Egenes
25 Mexicans by Phil Lee
Dollar Dress by The Waco Brothers
Hillbilly Monster by James Richard Oliver 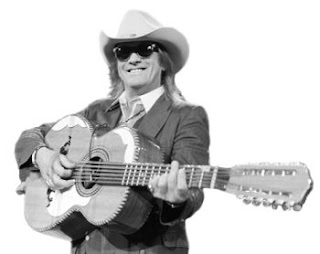 You Can't Hide a Redneck (Under that Hippie Hair) by The Bottle Rockets
Lawd I'm Just a Country Boy in This Great Big Freaky City by Alvin Youngblood Hart
Wolly Bully by The Sir Douglas Quintet
Nuevo Laredo by The Gourds
Bad Boy by Doug Sahm
Get a Life by Doug Sahm with The Gourds
Be Real by Freda & The Firedogs
The Rains Came by The Sir Douglas Quintet
CLOSING THEME: Comin' Down by The Meat Puppets

Steve Terrell is proud to report to the monthly Freeform American Roots Radio list
at March 27, 2009