A version of this was published in The Santa Fe New Mexican
March 13, 2009

The weird phenomenon of punk/blues duos — which bore commercial fruit in the early part of this decade with The White Stripes and The Black Keys — owes debts untold to a North Carolina twosome called The Flat Duo Jets. Led by guitarist/shouter Dex Romweber, the Jets burned out by the end of the '90s. While they never quite grabbed the brass ring, the Jets earned a certain reverence in rock's underground corners, a respect that continues to this day.

Romweber has lain low for the last few years, but now he's back with another duo — his sister Sara Romweber (formerly of a band called Let's Active) taking Chris "Crow" Smith's place behind the traps set. 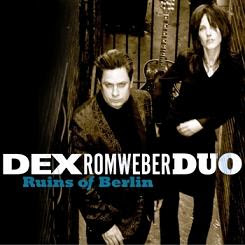 If you only heard a couple of tracks, such as "Pictures of You" and "Gray Skies," you might think the Dex Romweber Duo was Flat Duo Jets Mach II. But that's definitely not the case.

The new album, Ruins of Berlin, features the Romweber siblings collaborating with other musicians. Several songs include a bassist, while saxophone and even a cello pop up here and there. Rick Miller of Southern Culture on the Skids shows up for a guitar showdown with Dex. And there's a bevy of female guest vocalists, including Exene Cervenka, Neko Case, and Chan Marshall.

They are employed well. "Lonesome Train," in which Cervenka comes in on the second verse, is a wistful little minor-key ditty with a simple refrain, "Make love to me as we listen to the lonesome train ... out there in the lonesome rain." It's the type of tune that might have been crooned by the radiator lady in Eraserhead.

And speaking of David Lynch movies, I do believe my favorite track here is "Love Letters." When, as a grade-school kid, I used to hear the smoky blues torch-song original by Ketty Lester on my transistor radio, it seemed like a seductive invitation into some sexual netherworld. Years later, when Lynch used it in the soundtrack of Blue Velvet, it took on overtly sinister tones. ("Don't be a good neighbor anymore to her. I'll have to send you a love letter! Straight from my heart.") Neither Marshall's nor Dex's vocals come close to Lester's. But in this version, there's a subtle hint of menace to evoke disturbing memories of Frank Booth's evil joy ride.

Some of the selections here have a pronounced European feel. That's especially true of the instrumental "Polish Work Song," written by Dex and featuring Bob Pence on saxophone. Similarly, the title song — a Marlene Dietrich tune, for the love of Elvis! — has a jaunty little beat, but the melody is extremely similar to the slinky jazz song "Kiss of Fire."

Some of the best tunes here are the rocked-out instrumentals. "Lookout," which opens the album, is a surfadelic little cruncher featuring Miller as well as sax man Pence. Pence comes back for "Cigarette Party," a song where sister Sara gets to show her stuff on bongos.

The album ends with a simple country song, "It's Too Late," which Dex dedicates to a friend in North Carolina. It's not even a duo — just Dex playing an acoustic guitar and singing. It seems like the perfect coda for an understated but worthwhile album.

200 Million Thousand by The Black Lips. These guys have taken some flak in the garage/punk community recently for allegedly getting too big for their metaphorical britches, so I approached their latest album with some reservations. I'm happy to report that even if it's true that these boys from Georgia are getting swelled heads, this record is swell. 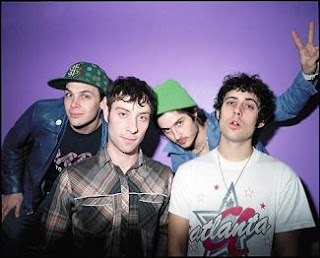 You can still hear the basic Black Lips sound in here — basic guitar snot rock with frequently off-key singalong verses that remind me of The Dead Milkmen of yore. But somehow they seem to be expanding their sound without sacrificing their raw, rough, amateur-hour appeal.

"Drugs" is a basic rocker that sounds almost like a lost Dictators song. "Trapped in a Basement" is a minor-key stomper that reminds me a little of The Beatles' "I Want You (She's So Heavy)." "Drop I Hold" is an experimental, lo-fi, almost trip-hoppy piece that doesn't sound like anything else this has ever done, showing an artsy side we never knew they had.

On some songs, The Black Lips sound as if they've been listening to another "Black" band —The Black Angels. Psychedelic sludge colors tunes like the faux-bordello "Body Combat" and "Big Black Baby Jesus of Today."

Sometimes you wonder whether The Black Lips are idiot savants or just idiots. Take the track called "I Saw God." It starts off with a child talking about "religious experience," followed by a spoken-word piece over a slow-churning guitar. Next thing you know, someone starts fooling with the tape speed and loud beeps begin to "censor" the speaker's increasingly volatile (if incomprehensible) rant. The music pounds and swells like some deranged anthem before slowing down and puttering to a finish.

One track I found irritating was "I'll Be With You." Not that the song's bad. I like the Mickey-and-Sylvia tremolo guitar. But we've heard it before on a previous Black Lips tune, "Dirty Hands." The band is obviously going for new directions elsewhere on the album, so it's strange that with this song they basically copy themselves.

I have not heard the complete album. For reasons best known to the band and its record company, the final track, "Meltdown," isn't available for download on eMusic (where I got the rest of 200 Million Thousand), Amazon, or iTunes. So if "Meltdown" is bad enough to bring down the rest of the album or good enough to make the whole thing Top-10-of-the-year worthy, I just don't know.
at March 13, 2009