BRING ME THE HEAD OF PERE UBU 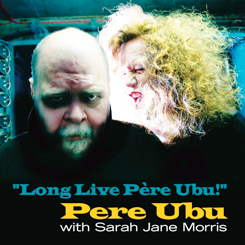 This has been going on for over a month, but I just got hip to the Pere Ubu podcasts. The fourth one was unleashed today.
Go HERE for the downloads. Below is the press release:

Chicago, IL, June 9, 2009 ­ Beginning June 16th, and then every two weeks until September 22nd, 2009, a scene from the first half of the radio play featuring the band Pere Ubu titled, "Bring Me The Head Of Ubu Roi" (Version 2), will be podcast for free download at hearpen.com. Pere Ubu¹s online-only record store, hearpen.com, is administered by Smog Veil Records.

This series of eight podcasts covers the first three acts of the six act radio play that was inspired by the songs on Pere Ubu's forthcoming Hearpen Records CD titled, Long Live Père Ubu!, (digital release via hearpen.com is available September 14, 2009). The idea to record a "radio play" was conceived as a way of managing the "silence" between songs in the concert set for the album so that the spoken word is manipulated and mixed with electronic ambience and transformed into a unique musical style of its own.

The script for the radio play, adapted by David Thomas from Alfred Jarry's Ubu Roi (King Ubu), is also Version 2 of a theatrical production, featuring Pere Ubu, also called "Bring Me The Head Of Ubu Roi" that premiered in its original version at the Queen Elizabeth Hall, London, April 25 and 26 2008.

Embedded in the podcasts are songs from the Long Live Père Ubu! album, as well as dialog and electronic ambience. Sarah Jane Morris (ex-Communards, Happy End) performs the role of Mère Ubu, partnering Thomas who performs as the character Père Ubu. Members of the band supply the voices of other characters in the play.

Jarry's proto-Absurdist stage play (which premiered in Paris in 1896) gave the band its name, and supplied the inspiration for the songs on Long Live Père Ubu! In its day the play provoked riots in the theatre and a national scandal. A vicious and satiric re-telling of Shakespeare's Macbeth, Jarry's work lambastes do-gooder monsters and the survival of the Unfit.