NO DEPRESSION ARCHIVES & ME

Here's a big blast from the not-too-distant past.
From 1997 to 2004 I frequently freelanced for No Depression, a magazine that specialized in alternative country, (whatever that was), and other American roots music. The magazine stopped publishing last year -- a victim of the troubled economies of the music and publishing industries -- though it lives on the Internet. 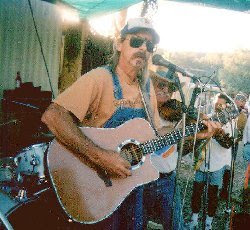 During my years as a ND contributor (which started waning as the demands of being a political reporter in New Mexico increased -- I'd just like to thank the governor), I wrote features on various musicians, including a lengthy profile on Terry Allen and an interview with Cornell Hurd. Among those I spotlighted were several New Mexico musicians including Kell Robertson, Mose McCormack, Bill & Bonnie Hearne and The Bubbadinos.
I reviewed some concerts, including Junior Brown's reunion with The Last Mile Ramblers at the Fiesta de Los Cerrillos in 1998 and the Red Nations Celebration and Native Roots & Rhythm shows in 1997.
I wrote obituaries for Dave Van Ronk (who I credit/blame for my career in journalism) and Howie Epstein who died in Santa Fe in 2003. In that piece I quoted my old friend Alex Magocsi, who would die a few years later.
I reviewed lots of CDs -- The Legendary Stardust Cowboy, Dan Hicks & The Hot Licks, Loudon Wainwright III, Judee Sill, Angry Johnny & The Killbillies, The Riptones, Dr. West's Medicine Show & Junk Band and Petty Booka -- among them.
Earlier this week, the good folks at No Depression launched the magazine's complete archives. You can read all the articles, reviews. columns, etc from issue #1 through #75.
And yes, that includes everything I wrote for them. (I haven't checked yet, but it looks like it's all there, even that weird hitchhiking memory that I originally wrote as a post on the old AOL No Depression music board.)
And you can even find Grant Alden's review of my CD, which was published in issue #8.
at July 09, 2009