TERRELL'S TUNEUP: BLUES FROM THE BOOMERS

I knew I was forgetting something. I should have posted this on Friday. What the heck, I'm on vacation!

A version of this was published in The Santa Fe New Mexican
July 3, 2009

On his new album Pentatonic Wars and Love Songs, Otis Taylor, the blues bard of Boulder, does what he does best — blues-based musical meditations that often tell grim stories. But at the same time, he's taking his music to strange new levels.

Like most of his recent work, the new album is almost all acoustic, though guitarist Gary Moore goes electric on a few tunes. Cornet player Ron Miles is back, and there are African drums on some songs, giving several numbers a spooky jazz feel. 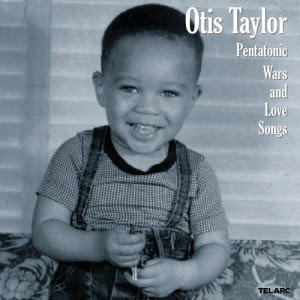 Taylor uses the phrase "trance blues," but I don't really like that label. True, Taylor's music sometimes gets spacey and repetitive. But trance blues doesn't even begin to describe some of Taylor's bolder sonic experiments here.

Take the song "Talking About It Blues." There are some moments toward the end of the song that have distinct echoes of Miles Davis' On the Corner. And that's even more true with the eight-minute epic "Walk on Water." To his credit, Taylor lets his sidemen stretch out.

As he's done on previous albums, Otis steps back on several songs and lets his daughter Cassie Taylor sing lead. Cassie, who also plays bass on some tracks, is really starting to come into her own. That's apparent on the sad, yearning "Sunday Morning."

There's a new version here of "Mama's Got a Friend" — the story of a kid coping with the fact that his mom has taken a lesbian lover — which first appeared on his Below the Fold album. (Mama's always up to something in the Otis Taylor universe. On another album, Double V, there was the song "Mama's Selling Heroin.") Called "Mama's Best Friend" on the new CD, the song is sung by Cassie.
At first it seems that Cassie's voice and the arrangement are so ethereal that the song loses a little bit of its original punch. But this track has its own weird charms. With Jason Moran's piano, Miles' cornet and percussion by Nasheet Waits on trap set and Fara Tolno on djembe drums, the song evolves into a jazzy voodoo workout.

And it's a great lead-in for the next song, "Maybe Yeah," also sung by Cassie. Here, Waits drums like he's in a marching band.

Taylor's previous album, Recapturing the Banjo, centered around that instrument. There's less of it on Pentatonic Wars, but the song "Country Girl Boy" is a banjo-driven stomper.

The bloooooziest song here is "Young Girl Down the Street." Over a slow funky blues-thud beat, some nasty organ licks by Brian Juan, and stinging electric guitar by Jonn Richardson, Taylor taunts a former lover by bragging about his latest conquest.

As on previous Taylor outings, the singer deals with issues of race. In the past, he has sung about slave ships and lynchings. But here, in the song "I'm Not Mysterious," the racism is far more subtle. It's about an 8-year-old black kid deeply in love with a white girl his age. His mom tells him that he's too young to be in love, but he suspects that might not be the real reason she's trying to discourage the relationship. It's heartbreaking when he sings, "I've got a little red wagon. You can use it anytime."

Pentatonic Wars and Love Songs is Taylor's 10th album in about 12 years. "I'm 60. I don't have a long time," Taylor said in a recent interview with his hometown paper, the Colorado Daily. Referring to his first career, as a rock 'n' roller in the '60s and '70s, he explained, "I stopped music for a lot of years, so I have to do a lot of records in a short period of time."

The sound of his catching up has been rewarding. Sweetheart Like You by Guy Davis. Davis is another baby-boomer bluesman. The frog-voiced guitar picker's latest album has covers of songs by Willie Dixon, Muddy Waters, Son House, Big Joe Williams, and Bob Dylan, plus a couple of tunes based on Leadbelly songs.

He does justice to most of these. I especially like his slow-grooving take on Williams' "Baby, Please Don't Go" (well, slow compared to the rocked-out versions I love by Them and by The Amboy Dukes) and his banjo-and-bass version of Muddy's "Can't Be Satisfied."

But far better than the covers' original songs. There's the wistful "Sweet Hannah," which is about an affair with a married woman, while "Steamboat Captain" sounds like a long-lost song from some movie about the deep South.

"Bring Back Storyville" is a funny little romp about a guy nostalgic for New Orleans' fabled whorehouse district. "I had me a woman used to hold my jug/Kept it in a trap door under the rug/I'd come there, lay back and drink my fill/Bring back, bring back Storyville."

Davis claims he wrote "Going Back to Silver Spring" — which has a Blind Willie McTell feel to it —about a girl who promised to send him naked photos of herself if he wrote her a song. "Hey! Where are those pictures at?" he writes in the liner notes.

Most of the album is basic acoustic blues. But Davis subtly incorporates a little technology in "Words to My Mama's Song," which features "vocal percussion" (you've heard this on recent Tom Waits works) and a mid-song rap by his son Martial, who is in his late teens or early 20s.

The one misstep on this album is Dylan's "Sweetheart Like You." Not that's it's a bad version, and I'm not saying it doesn't belong on the album. It's just that it's so slow that it's a questionable way to kick off the album. "Storyville" or "Slow Motion Daddy" would have worked better in the lead spot.
at July 07, 2009