A version of this was published in The Santa Fe New Mexican
July 10, 2009

Of all the bars, nightclubs, and music venues that influenced my career as a journalist, none compared with the Line Camp in Pojoaque.

If you’ve moved to the area in the last 23 years or so, you might not be familiar with the fabled watering hole. The Line Camp, located less than 20 miles north of the city on U.S. 84/285, was a major center of music in Northern New Mexico between 1979 and 1986. (And in its previous incarnation, between 1938 and 1976, the building was called the Pojoaque Tavern.)

Not only did I hear a shipload of great music at the Line Camp and get to meet and interview a lot of fine musicians — John Lee Hooker, Etta James, Doc Watson, Flaco Jimenez, Peter Rowan, Jerry Jeff Walker, Richie Havens, Charlie Musselwhite, Maria Muldaur, and New Riders of the Purple Sage among them — but I learned lessons in journalism there that guide me today. 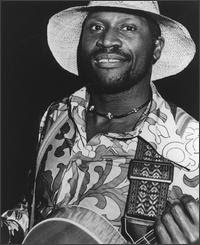 The main lesson is that it’s not a great idea to get drunk before conducting interviews.

The occasion was an early 1980 Line Camp show by Taj Mahal. I was in my late 20s then and freelancing for the Santa Fe Reporter.

It was my second interview ever. The first had been a couple of weeks before with folk singer Dave Van Ronk. At that show I’d gone backstage at the Armory for the Arts and made contact with Van Ronk, who almost immediately suggested that we go to a bar to do the interview. We did. I got loaded, though not as much as Van Ronk did. He was gracious, loquacious, and quotable. I had a great time, turned out a decent article, and thought, "The journalism scam is for me."

But the Taj interview didn’t turn out as well. Just like the night with Van Ronk, I had a few drinks. But this time I was drinking while Taj played — before the interview. 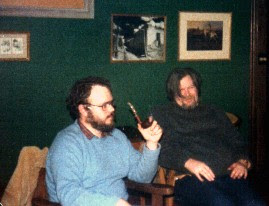 My then-wife and I got into a fight. She got angry and left me stranded at the Line Camp. By the time I went back to the dressing room for the interview, I was in no shape to be talking to anyone. Taj was nice enough to talk with me, but I don’t really remember much he said.

After hitchhiking home that night, the next morning I found my notes were illegible gibberish (even worse than usual) and my cheap tape recorder had malfunctioned. Taj’s voice was a barely audible and unintelligible rumble. My story turned out to be a salvage-job review of what I remembered of the show and some background information on the singer and his band. It had virtually no quotes from Taj.

I was surprised when the Reporter decided to pay me for it anyway.

Fortunately, I have many happier (and clearer) memories of the Line Camp. One of my biggest thrills was when honky-tonk titan Hank Thompson played there and the guy who introduced me to him was none other than Roger Miller, who was living in Tesuque at the time. 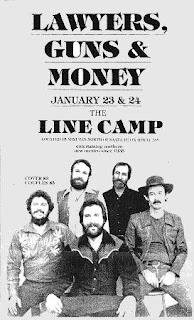 And about a year after my disastrous Taj interview, Taj came back to the Line Camp and his opening act was me. Nobody argued that the wrong singer was headlining, but nobody booed me off the stage either. And I remembered it all the next morning.

* Voodoo Rhythm Comes to Santa Fe. You’ve heard me play his music on the radio. You’ve seen me rant about him in this column and on my blog. And now, straight out of Switzerland, the right Rev. Beat-Man is coming to town.

The first dealings I ever had with Beat Zeller, aka Rev. Beat-Man, was when I caught him in a lie. It was back in 2004.

On a visit to Cheapo Discs in Austin, Texas, I picked up a curious little CD called Gentleman of Rock ’n’ Roll (The Q Recordings, New Mexico ’58-’64) by a greasy-haired rockabilly named Jerry J. Nixon. It was on a Swiss label called Voodoo Rhythm.

I was intrigued. And even more intriguing was the story inside — how Nixon, born in England, illegally came to the States as a bank robber on the run, ended up in Santa Fe, where he worked at a cardboard factory, joined the Communist Party, and rocked local nightspots like the Atahualpa Bar & BBQ.

Like the journalist nerd I am, I spent a couple of hours at the library looking though old city directories and phone books searching in vain for Jerry J. Nixon landmarks like the Atahualpa, Q Recording Studio (it was supposed to be on Galisteo Street), and, of course, the cardboard factory.

I e-mailed Voodoo Rhythm for help. At first Beat-Man claimed his information came from interviews with Nixon’s family. But then, right in the middle of an e-mail, he confessed that he was Jerry J. Nixon (and now that I’ve seen photos of Zeller and heard his music, the resemblance is obvious).

I felt like an idiot, and he probably was amazed that anyone would take the Jerry J. Nixon story seriously.

I’ve been a Beat-Man/Voodoo Rhythm fan ever since. 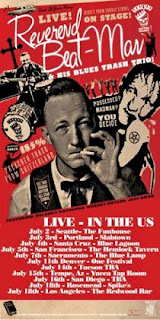 Actually Jerry J. Nixon is just one of the Rev.’s many guises. He has also performed and recorded as the masked (lucha libre style!) Lightning Beat-Man and with bands including The Monsters (crazed Swiss garage-punk rock), Die Zorros (sounds like Joe Meek in the afterlife), and The Church of Herpes (electro/industrial Kraut-rock and a little gospel).

His latest project is called Surreal Folk Blues Gospel, a pretty apt description of the psycho-roots music that has resulted in two CDs and a DVD collection of videos.

The show is presented by The Process, the same magical folks who have brought Michael Hurley, Carla Bozulich, and other musical innovators to Santa Fe. A new Sean Healen outfit called Goth Brüks opens the show. The group reportedly plans to play “a once in a lifetime set of songs you may not ever see him do again.”