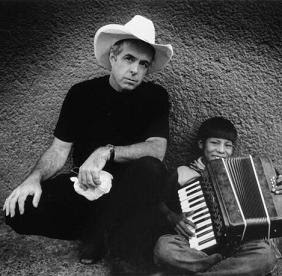 I get so many music press releases in my e-mail these days it's ridiculous. And nearly all of them aren't worth the bytes used to create them.
But leave it to songwriter Tom Russell -- or at least his publicist -- to come up with the most interesting press release from a musician I've seen in a long time:

Rugged El Paso songwriter Tom Russell has finally revealed a long-held secret: he holds a Masters degree in Criminology. With "Criminology" and "East of Woodstock, West of Viet Nam," two of the highlights from Blood and Candle Smoke (Shout! Factory), Russell reveals his secret and also chronicles the times he's been faced with a gun pointed at him.

* First, in Ibadan, Nigeria in 1969, he was arrested for taking photos in a war zone on his first day, arriving in the middle of a vicious tribal war. In the months that followed, he read Graham Greene and drank palm wine in the bars.

* In Canada, 1971, while Russell was in Prince Rupert playing with a band, a clerk at a fleabag hotel stuck a gun in his face and slurred, "How you like it now, white boy? How's your blue-eyed boy now, Mr. Death?" Russell realized later that it was an ee cummings quote.

"I was amused and interested in these little violent, character-building vignettes, because I had been educated as a Criminologist. Got my Masters degree, but never told anyone in the music biz. But in those honkytonks and skid row hotels I was
experiencing the real subject matter - up close and very personal," writes Russell on his blog at http://www.russelltom.blogspot.com

If the music biz gets too hard for Russell, I guess he could end up as a consultant for the El Paso Police Department.
I opened for Russell at a Los Alamos gig about 12 years ago. At the time, I was a crime reporter. Wish I knew then that he was a criminologist.
I haven't heard the album yet, but I'm looking forward to it.
I used a couple of Russell selections for my latest Big Enchilada podcast. "The Outcast," with vocals by the late Dave Van Ronk (from Tom's album The Man From God Knows Where) and a spoken segment that ends the podcast by Little Jack Horton, recorded for the Hotwalker album.
at July 08, 2009