OFFICIAL STATE GUITAR TO BE UNVEILED 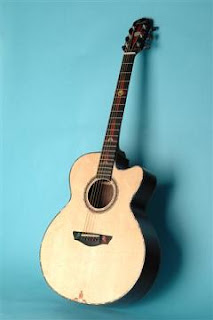 The guitar was created by Pimentel & Sons of Albuquerque. According to the state Department of Cultural Affairs, "Immediately following the presentation, which includes a special performance on the state guitar by Ben Perea, a free public concert will be offered by renowned guitar masters Gustavo Pimentel and Hector Pimentel and Leyenda."

Earlier this year, the state Legislature passed and Gove. Bill Richardson signed Senate Bill 52, which made this the state’s official state guitar. It joins other official state symbols including birds, reptiles, cookies, poems, songs and question. ("Red or Green?")
The Sunrise, according to the DCA is "a steel-string acoustic guitar, made of East Indian rosewood, red Sitka spruce, Honduras mahogany and ebony." It features five Zia emblems, (designed with the permission of Zia Pueblo) inlaid with coral, mother of pearl and ebony, and adorned with the New Mexico sun, a Navajo star, a bear claw, a roadrunner, an outline of the state of New Mexico and an American flag.
Everything but a Roswell alien and a jackalope.
The guitar will be on temporary display at the NHCC through the remainder of 2009 and early 2010, and eventually will be placed permanently in the collections of the New Mexico History Museum in Santa Fe.

Pimentel and Sons was established in 1951 in El Paso, Texas by Lorenzo Pimentel. His sons Rick, Robert, Victor and Agustin have carried on the tradition in Albuquerque,