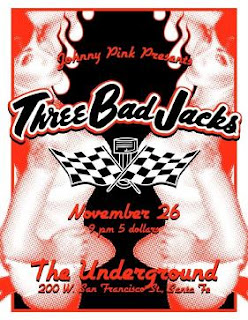 If you're not too bloated from Thanksgiving dinner, there's a cool psychobilly band playing in Evangelos' basement -- a performing space currently known as The Underground -- that night.
Three Bad Jacks is a Los Angeles based trio. I saw them on the 4th of July at the Hootenanny Festival in Irvine and they rocked.
Thursday's show starts at 9 p.m. and the cover is a mere $5.
A promoter named Johnny Pink has started putting on shows in The Underground. Earlier this month he had The Koffin Kats, another psychobilly bunch. On Dec. 8 a band called Jon Wayne & The Pain will play there, with local blues dudes Gary Farmer & The Troublemakers opening.
Nice to see another venue opening up like this and nice to see this space in particular being used again. I think the last show I saw down in Evangelos' basement was a trick pool shot exhibition by a guy called Fast Eddie whose best trick of the nigth was making a lot of people in the audience believe his claim that he was the inspiration for the Paul Newman character in The Hustler.
And for some completely different kind of music, I just got a last-minute email about a show happening tonight (Wednesday) at High Mayhem, 2811 Siler Lane (at Siler Road).

Tristan Perich wrote, "I'm a New York-based composer, lugging a harpsichord around the country and playing a new piece for it with low-fi 1-bit electronics (an extension of 1-Bit Music, my circuit-in-a-cd-case album from a few years ago). Lesley Flanigan performs on her own hand-built speaker feedback instruments, which generate tones that she layers on top of her own voice."
A trip-hop group from Cincinnati called Evolve also is on the bill
I haven't heard them before, but it's High Mayhem, so it's bound to be interesting.
Suggested price is $10. Show starts at 9 p.m.