A version of this was published in The Santa Fe New Mexican
November 13, 2009

Here's the perfect introduction to Gogol Bordello for those who have not been initiated to the wild joys of this international troupe — our impoverished state is one of the few places in the world in which Gogol has never played, and that's a whole lot of people. (In recent weeks the band has played Colorado, Arizona, and Texas. I swear to God, sometimes it seems like New Mexico is just a giant hole in the rock 'n' roll map.)

Live From Axis Mundi is a CD/DVD set that pretty much sums up this nine-member New York-based band. The 11-song CD consists mainly of live performances of Gogol classics, plus a couple of outtakes from previous studio albums, a few demos, and a dubby instrumental version of "Immigrant Punk." The DVD is a concert video culled from two New York shows on consecutive nights in July 2007, around the time of the release of the band's last studio album, Super Taranta!.

A little history: this band is fronted by singer/guitarist/songwriter Eugene Hütz, a Ukrainian whose family fled that land after the 1986 Chernobyl nuclear accident. Gogol fans just assume that Hütz, like Dr. Bruce Banner, was mutated and transformed by radiation. Whatever the case, The Incredible Hütz landed in New York City in the early '90s, where he fell in with like-minded musicians, many of them immigrants like himself. In an early incarnation of Gogol, the band reportedly played straight guitar/accordion-driven Gypsy music for Russian weddings. But Hütz is a rocker at heart and before the end of the decade, he crafted a sound he calls "Gypsy punk." 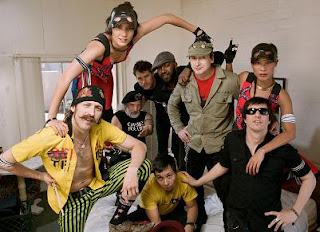 I find that phrase, like I do so many neat tags, a little too cute and glib. "Gypsy punk" doesn't come close to doing justice to the sound of the band, which includes musicians from Russia, Israel, Ethiopia, and Scotland. True, there are elements of Gypsy music in the mix. Sometimes there are even acoustic guitar parts suggesting flamenco. As for the "punk" elements, you won't hear much Ramones or Sex Pistols in the Gogol sound. But there are certain similarities with some of the latter-day Clash experiments. If Joe Strummer were still alive, I bet he would have produced at least one Gogol Bordello by now.

The Axis Mundi CD is not quite a greatest-hits affair or even a good survey of the four previous Gogol albums. It's weighted toward Super Taranta! (four songs from that album, plus an outtake) and, to a lesser extent, its predecessor, Gypsy Punk: Underdog World Strike.
But it does contain some of Gogol's finest tunes. Perhaps my personal favorite Hütz song of all time is "American Wedding" ("Have you ever been to American wedding? Where's the vodka; where's the marinated herring?"). The BBC version here is all fired up, even when Hütz fakes snoring in a quiet instrumental bridge. By the end of it, you're craving marinated herring.

"Stivali E Colbacco," an outtake from the Super Taranta! sessions, has an instrumental section featuring a guest banjoist playing off Moscow-born Sergey Rjabtzev's fiddle. For a minute or so, it's like a Slavic hoedown. A new treat is "You Gave Up," a multisegmented odyssey that takes a few minutes to heat up. In this tune you can hear the influence of one of Hütz's musical heroes, Nick Cave. I'm not sure why Hütz shouts "Cumbia!" at the end of the tune. (The electric guitar solo in "Mishto" sounds a lot closer to cumbia than it does in "You Gave Up.")

Gogol Bordello is one of those bands whose true disciples insist that you have to see the group live before you can really claim you're a fan. I tend to dismiss talk like that, but the DVD part of this package shows that the band's live performance is a wondrous thing.
Of course, watching the DVD in the comfort of your living room, even with the volume cranked loud enough to frighten your neighbors, isn't the same as being in the same room with the band and thousands of sweating, bouncing devotees. But seeing the stage show — Hütz's intense singing and wild antics (at a couple of points he pops up, as if by magic, in the balcony, surrounded by fans); Rjabtzev playing his fiddle like some subversive shaman and looking like a crazy Russian version of Mick Fleetwood; dancers Elizabeth Sun and Pam Racine playing cymbals and a big bass drum as if they've just escaped from some bizarre marching band — you realize that, besides being crafty musicians, the band's members are ace entertainers.

The song selection on the DVD includes most of the essential Gogol repertoire: "Start Wearing Purple," "Dogs Were Barking," and "Not a Crime" — my favorite besides "American Wedding" — complete with obnoxious sirens. The DVD also contains four promotional videos (Did MTV ever play these?), an enjoyable little bio doc called Creative People Must Be Stopped, and stray Gogol performance footage.

My only complaint about the whole package is that I wish there were audio versions of the concert songs so we could stick them in our computers and iPods. That way Gogol fans would never have to leave the show.
at November 13, 2009