A version of this was published in The Santa Fe New Mexican
November 27, 2009

It’s a good thing that the King Khan & BBQ Show isn’t as famous as the Beatles and that President Obama probably doesn’t hate and fear Arish “King” Khan as much as President Nixon hated and feared John Lennon.
Improbable as this comparison is, I couldn’t help but recall Lennon’s tribulations when the Nixon administration tried to get him deported as an “undesirable alien” because of a drug bust. What prompted this memory was Khan’s arrest with his road manager, Kristin Klein, in Kentucky earlier this month on charges of possession of psychedelic mushrooms. 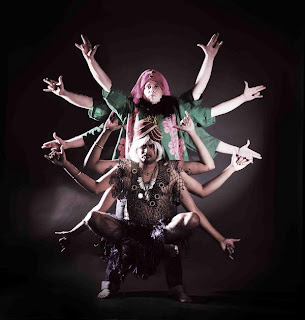 The arrest of Khan, a Canadian citizen, occurred on the road between the band’s gigs promoting its new album, Invisible Girl. 
Here’s the group’s official statement on Nov. 17, via Pitchfork:

“On November 16, 2009 Kristin Klein entered a guilty plea to 2nd degree possession of a controlled substance in Christian County, Kentucky. Ms. Klein was driving a rental vehicle that was randomly stopped at a safety checkpoint. Officers located a controlled substance in the cab of the vehicle. Ms. Klein was unaware of the contraband and the validity of her license was indeterminable at time of arrest. Under KY law a driver of a vehicle is responsible for its contents. Therefore, Ms. Klein entered a guilty plea and is scheduled to appear on April 2, 2010, to provide proof of her valid license.”

The Kentucky New Era newspaper reported that Khan and two others with the KK & BBQ entourage “were allowed to enter a pretrial diversionary agreement. The drug possession charge against each of them will be dropped if they stay out of trouble for a year, said [Khan’s local lawyer Rick] Boling. They were ordered to pay court costs.”
There were fears throughout Khan fandom that this bust would be a terrible chapter in the war on drugs — being arrested in Christian County, Kentucky, for Pete’s sake! As the River Front Times’ St. Louis Music blog put it, “Keep in mind, it’s not hard to imagine a scenario where cops in a tiny Kentucky town unfairly hassle a crazy looking Indian man wearing a huge shark-tooth necklace.”
But it looks like the judge was pretty lenient, almost more concerned about the driver’s license than he was the mushrooms. Of course, the catch is that Khan has to stay out of trouble for a year. That could be the real trial.
While Khan is also known for his soul revue The Shrines (and less so for The Tandoori Knights, another two-man band, and the garage/punk/lo-fi/gospel supergroup The Almighty Defenders, whose self-titled album I reviewed here a few weeks ago), some of his finest work is with Mark Sultan. Sultan, aka BBQ, is another Canadian, who was Khan’s bandmate in a Montreal band, the Spaceshits.
You might think of two-man guitar/drums groups in terms of stripped-down blues bashers like Flat Duo Jets and the early White Stripes. There’s certainly that element at work in KK & BBQ.
But what distinguishes this dynamic duo is its anchor in raw doo-wop. The basic sound, therefore, is punk-rock roar, embellished by some Ruben & The Jets/Sha Na Na/rama-lama-ding-dong silliness but based on some seriously pretty melodies and occasional sweet harmonies.
It’s all there in the opening cut, “Anala,” on which Khan handles the lead vocals. It wouldn’t be hard imagining The Penguins or The Moonglows singing this.
This is followed by the title cut, which features a folk-rock guitar that sounds inspired by The Beatles’ “Ticket to Ride” or The Searchers’ “When You Walk in the Room.”
But my favorites are the ones on which Sultan’s high voice soars, such as “I’ll Be Loving You” and “Tryin’.” Sometimes Sultan sounds like a more ragged Sam Cooke — or, cynics might say, a hipster version of Steve Perry of Journey. Whatever, the boy can sing.
The most interesting Sultan-led song on Invisible Girl is “Third Avenue.” It starts out and ends as a seriously greasy doo-wopper, but it’s got a strange psychedelic freak-out section featuring guitar and organ. Unfortunately the song that’s getting the most attention is “Tastebuds,” which is obscene, juvenile — and annoyingly catchy. Looks like maybe the two are trying to expand their fan base by becoming fratboy faves.
I just hope they weren’t blasting this on the car stereo when the cops stopped them in Kentucky. 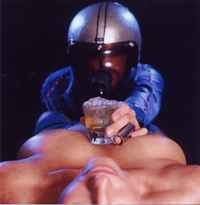 * My Shit is Perfect by Bob Log III. If a two-man band is just too crowded for you, check out one of the most fun one-man bands out there — and “out there” is a good description — Mr. Log’s music might be for you.
This is just good down-home stomping blues with Log’s trademark distorted vocals (he performs in a motorcycle helmet) and some scattered electronic embellishments. Log was once part of the Arizona-based blues/noise duo called Doo-Rag back in the mid-’90s.

Log’s basic sound on this album is a funky, clunky hoedown. But it’s obvious that Log actually knows how to pick, as he shows every so often — including with the speedy acoustic guitar workout on the instrumental “Bucktooth Potato.”
My favorite here is “Manipulate Your Figments.” It’s one of the best electronically mutated blues tunes I’ve heard in a while.