TERRELL'S TUNEUP: TRASH IN THE BEST SENSE OF THE WORD

A version of this was published in The Santa Fe New Mexican
November 6, 2009

It supposedly started out as a band that played rockabilly — though admittedly a bizarre, mutated strain of rockabilly. Heavy Trash — made up of Jon Spencer and Matt Verta-Ray — does to rockabilly what Spencer’s previous band, The Jon Spencer Blues Explosion, did to the blues.

And on their third album, Midnight Soul Serenade, Spencer and Verta-Ray expand their trashy palette. Even more than on the group’s previous efforts, Going Way Out With Heavy Trash (2007) and its self-titled debut (2005), Spencer and Verta-Ray sift through the rubble of all sorts of rock ’n’ roll and funky soul styles and make them part of their unique joyful noise. 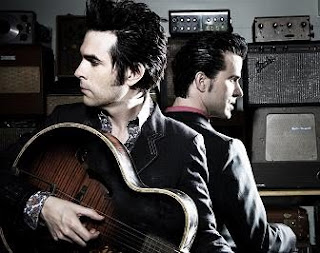 While Heavy Trash doesn’t really sound much like any other group (except maybe The Blues Explosion), several songs on Midnight Soul Serenade sound as if they could be adapted by other bands.
For instance, the opening blast, “Gee I Really Love” sounds like Spencer and Verta-Ray spent a little time dumpster diving at the Brill Building. It has a Shangri-Las feel and would be perfect for the next Mary Weiss solo record. It comes far closer to the New York Dolls spirit than almost anything on the last New York Dolls album.
That song is followed by the dark, bluesy “Good Man,” which sounds as if it could be a long-lost Los Lobos tune. Take a listen and imagine César Rosas on lead vocals. And wouldn’t it be cool if Al Green took a crack at “Isolation,” a slinky little soul-influenced tune with that slinky organ sound found on Green’s early records?
No two songs sound the same. “Sweet Little Bird” sounds like one of Tom Waits’ graveyard blues monsters (think “Big Black Mariah” or even “Jesus Gonna Be Here”). “Pimento” is a Latin-tinged surfy instrumental that starts out with a nylon-string guitar riff. And “(Sometimes You Gotta Be) Gentle” is probably the roughest rocker on the record. “In My Heart” is a greasy ballad featuring a guitar right out of Santos & Johnny’s “Sleep Walk.” There’s even a “sermon” during the instrumental break: “Don’t you see, the soul of a man is a terrible thing. ... Cracks in the wall, spiders in the basement/Without love, you got nothin’ but torment.”
All the songs here are original, with the exception of one of my favorite LaVern Baker songs, “Bumble Bee.” Still, my favorite non-LaVern version of that R & B classic — known for its refrain, “Ooo wee, you hurt me like a bee/A bumble bee, an evil bumble bee!” — was by The Searchers, an underrated British Invasion band.
The one tune that doesn’t really do much for me is “The Pill.” No, it’s not a Loretta Lynn cover. It’s a spoken-word shaggy-dog story about a girl named Betty (“She wore black jeans and a feather in her hair like an Indian.”) over a slow-burning music backdrop featuring a droning guitar and occasional notes from a piano. Maybe I’m not following it closely enough, but I never figured out whether the pill here is LSD or Viagra.
Speaking of The Blues Explosion: Here’s good news for those of you who might have missed them the first time around. Late next spring, according to last week’s Billboard, the Shout! Factory label will begin reissuing that band’s catalog, beginning with 1995’s Now I Got Worry and a new best-of collection. Some of the reissues will include bonus tracks.
Also recommended: 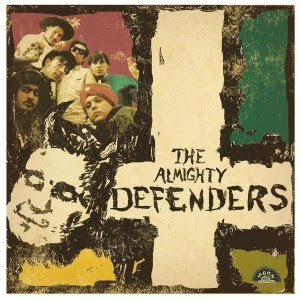 * The Almighty Defenders. Goodness Gussie, it’s a dadgum garage/punk, trash/blues, lo-fi supergroup, a Marvel Team-Up of Black Lips and The King Khan & BBQ Show. And it’s (falsely) advertised as gospel music.
The back story behind this album is that the Atlanta-based Black Lips fled the great nation of India during their world tour earlier this year. (They’ve said in interviews that they were afraid they were going to be arrested for “homosexual acts” onstage.) The group landed in Berlin at the home of Arish “King” Khan, and the jams that ensued resulted in this album.

The album has a relaxed, informal feel — the recordings sound like spontaneous musical outbursts. You could argue that the sum is less than the parts since the “regular” albums of both groups are superior to this collaboration.
But there’s lots of fun stuff here. On the first song, “All My Loving” (not the Beatles’ song of the same title), Khan leads the band in a simple but exhilarating singalong. Mark Sultan, aka BBQ, a Canadian who’s in love with doo-wop, really shines on several cuts, especially “Cone of Light.” It’s a sweet soul shuffle — and the most gospel-sounding track on this unholy record. With Sultan on lead vocals, it sounds like Sam Cooke live at CBGB’s.
Another favorite is “Bow Down and Die,” which sounds like a punk reworking of the country gospel chestnut “Glory Glory.”
There’s one cover, albeit an obscure one — The Mighty Hannibal’s “I’m Coming Home,” a soul song about a soldier going off to war.
I even like the two less-than-two minute instrumentals — “30 Second Air Blast” and “Death Cult Soup ’n’ Salad.” I just want to know who’s doing the Moe Howard imitation at the beginning of the latter.
Too bad these guys aren’t famous enough to be on the right-wing radio radar. “Jihad Blues,” with the line “just gimme a box cutter and a one-way ticket,” would be enough to set off a great fake controversy.
All and all, The Almighty Defenders is keeping me satisfied until I get my hands on the just released new one by King Khan & BBQ, Invisible Girl. (Watch this space.)

Here's a couple of Defenders videos