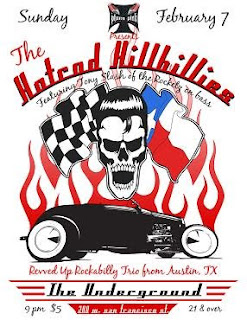 Johnny Pink's doing his darnedest to put Santa Fe on the a psychobilly destination map. This Sunday he's bringing a Texas trio called The Hotrod Hillbillies to The Underground (or, as we oldtimers call it, Evangelos' basement.)
I probably can't make it, mainly because it would be psychologically devastating for me to miss doing Terrell's Sound World two weeks in a row (last week I took off to catch Reverend Peyton's Big Damn Band at the Brewing Company.)
But I tell you what ... If you want to skip Sound World to go hear the Hotrod Hillbillies, that'll be an excused absence.
That show starts at 9 pm and the tickets are a mere $5.
Speaking of the Reverend Peyton (I commented on Twitter that in recent months I've seen Rev. Horton Heat, Rev. Beat-Man and now Rev. Peyton. Rev. Billy C. Wirtz, you're next!), check out my photos HERE and if you want to hear some his tunes, scroll down a little and check this blog post.