A version of this was published in The Santa Fe New Mexican
February 5, 2010 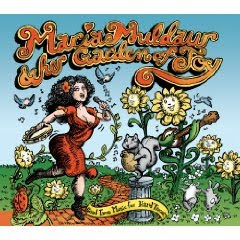 I've said it before, I'll say it again: jug-band music was the original punk rock. It's been said that punk rock, in its early days, was the most democratic kind of music, because you didn't have to know how to play your instrument to be in a band.
But with a jug band, you don't even need to have a real instrument. Antiquated household appliances like the washtub and washboard serve as your rhythm section. You could become a virtuoso on kindergarten percussion instruments and kazoo. And, of course, there's the jug, which is cheaper and much easier to transport than a tuba.

And jug-band music refuses to die. The genre's direct influence can be heard on the recent South Memphis String Band album Home Sweet Home (reviewed here a few weeks ago), featuring Alvin Youngblood Hart, Jimbo Mathus, and Luther Dickinson — though they didn't use a jug. And it lives in Maria Muldaur & Her Garden of Joy and the Asylum Street Spankers' latest album, God's Favorite Band, which is one of the group's best.

History in a jug: Nobody knows who was the first person to blow into a jug to provide the bass part in a band. According to Don Kent's liner notes for the excellent jug-band compilation Ruckus Juice & Chittlins, by the year 1900, there was a group called the Cy Anderson Jug Band playing in the streets of Louisville, Kentucky. And by 1913, a banjo player named Earl McDonald had a steady gig for his jug band at the Kentucky Derby.
The jug-band virus spread south to Birmingham, north to Chicago and Cincinnati, and to Memphis, where it gave birth to influential groups like The Memphis Jug Band and Cannon's Jug Stompers.

Jug-band fever faded after the '30s. But it reared its head again during the folk revival of the 1960s. One of the prime movers was an outfit called The Even Dozen Jug Band, which never got famous during its short lifetime, even though its alumni include The Lovin' Spoonful's John Sebastian; mandolin great David Grisman; guitarist Stefan Grossman; Steve Katz, an original member of Blood, Sweat & Tears; and Muldaur, then Maria D'Amato. She became best known in the mainstream for her early '70s hit "Midnight at the Oasis," but she first got a taste of national fame with jug-band music.

I just met a girl named Maria: She later joined what became the most important of the jug-band revival groups, Jim Kweskin & The Jug Band (which included singer/guitarist Geoff Muldaur, who would become her husband). Kweskin, whose band appeared on several national television variety shows, spawned a number of other jug bands around the country.

There was loads of talent in Kweskin's group, but, especially for the boys, Maria D'Amato Muldaur was the star. Try to listen to her version of Mississippi John Hurt's "Richland Woman" without falling in lust.

Garden of Joy is a glorious return to jug-band music for Muldaur. Even Dozen buddies Sebastian and Grisman are here, as is fellow Kweskin vet Fritz Richmond, who poots forth on jug on "Sweet Lovin' Ol' Soul." There are other notable guest stars, too. None other than Taj Mahal plays banjo and guitar on several cuts.

And then there's Dan Hicks. He shows up for a snazzy duet on the medley of the sexy "Life's Too Short" and the silly "When Elephants Roost in Bamboo Trees." Plus Muldaur sings a couple of songs from Hicks' latest album, Tangled Tales — "The Diplomat" and "Let It Simmer." She was always a wonderful interpreter of Hicks. "Walkin' One and Only" was a highlight of her first solo album, while she got the title of her second album, Waitress in a Donut Shop, from Hicks' song "Sweetheart."

While jug-band music is a joyful and nostalgic sound, there's an edge to Garden of Joy, which is subtitled Good Time Music for Hard Times. The last two songs on the album emphasize the hard times. These are the Depression-era tunes "Bank Failure Blues" and "The Panic Is On." She has updated the lyrics of the latter. "Obama's in the White House sayin' 'Yes we can'/I know he's gonna come up with a real good plan." 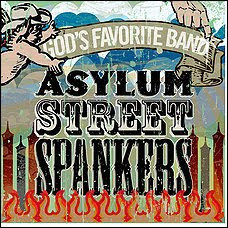 Meanwhile, back in heaven: One of the best tunes on Garden of Joy is "He Calls That Religion." This old Mississippi Sheiks tune calls out greedy, lecherous preachers ("He calls that religion, but you know he's going to Hell when he dies").

This song would fit in perfectly on the new Asylum Street Spankers album. God's Favorite Band is a raucous live record full of classic gospel tunes — "Down By the Riverside," "Wade in the Water," and Blind Willie Johnson's "Dark Was the Night, Cold Was the Ground," for instance. And singer Christina Marrs, while no Maria Muldaur, belts out "Each Day" and "By and By" with brass and bravado.

It's also got some left-field gospel, such as Violent Femmes' "Jesus Walking on the Water," and the ultra-goofy original tune "Volkswagen Thing," in which singer/washboard man Wammo claims God drives the vehicle of the title.

But for me, the highlight on this set is "It Ain't Necessarily So." This song is from Porgy and Bess and perhaps best known from Cab Calloway's version. My first real concert memory is hearing Calloway singing that during a half-time show at a Harlem Globetrotters game. It twisted my head off! I didn't know anyone was allowed to sing things like "The things that you're liable to read in the Bible, it ain't necessarily so" and poke fun at biblical stories in public — at least not at a basketball game in Oklahoma!

It's not shocking that the Spankers would do a song like this. But ending an album full of gospel songs with it is delightfully subversive in itself.

Fill that jug: I'm going to do a lengthy jug-band set Friday night on The Santa Fe Opry, on KSFR-FM 101.1 and streaming live at ksfr.org. My show starts at 10 p.m., and the jug-band set will start at 11 p.m.

And check out my new Big Enchilada podcast. The last set is made up of some of my favorite jug-band tunes.
at February 04, 2010