A version of this was published in The Santa Fe New Mexican
February 26, 2010

Fred Cole, as he's told us himself, has "been screaming at the top of my lungs since 1965." 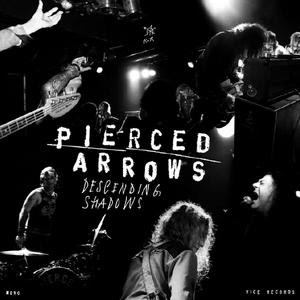 That's from a song called "Poor Born" by Cole's lost lamented band Dead Moon, which broke up about four years ago after a roughly 20-year run that produced more than a dozen albums (mainly self-released on the band's own Tombstone Records label, though Sub Pop Records released a great double-disc retrospect compilation, Echoes of the Past, a few years ago).

But don't spend too much time lamenting. Even though Dead Moon is gone, two-thirds of the band — Fred Cole and his bass player and wife of 40-plus years, Toody Cole — are back with another fine group, Pierced Arrows. The Arrows released an album called Straight to the Heart a couple of years ago on Tombstone.

And now comes their sophomore effort — and it's no slump — Descending Shadows on Vice Records (also the home of The King Khan & BBQ Show, The Black Lips, and others among my recent favorites), which is a rocking triumph and a sweet jab in the eye to the idiotic notion that rock 'n' roll belongs exclusively to the young.

Lollipops and witches: According to a recent online interview with Fred and Toody, as a mere teen in Las Vegas, in the mid-'60s, Fred played bass with Frank Sinatra Jr.'s band. Now that's paying dues. He also had a band called The Weeds. Some record-label munchkin thought that name was too close to The Seeds, so they renamed the group The Lollipop Shoppe. I've always believed this qualified Cole and company to be the best band with the crappiest name. Their intense, urgent-sounding hit "You Must Be a Witch", which can be found on the first Nuggets box set of '60s garage-band hits, brings a lot of images to a listener's head, none of which are of lollipops.

After the Shoppe closed for business, Fred Cole persevered. He and the Mrs. opened a music store in the Portland area, raised a bunch of kids, and kept playing music. The birth of punk rock inspired a group called The Rats, which also featured Toody.

And then, with drummer Andrew Loomis, came Dead Moon; its history is lovingly told in the documentary Unknown Passage: The Dead Moon Story (Netflix fans, you can find it there).
In that group, Fred didn't stray far from "You Must Be a Witch" (a song Dead Moon was known to sometimes include in its sets). His ragged, at times falsetto voice and fuzzy guitar were still out front. Rooted in the Nuggets era and invigorated by psychedelia and punk rock, Dead Moon played a timeless style of rock, comparable to that of Cole's contemporary Roky Erickson.

And now, Pierced Arrows: I'm not sure why Dead Moon broke up. But at least Mr. and Mrs. Cole are still together.

The good news for Dead Moon fans is that the new trio sounds like a continuation of Moon's basic guitar/bass/drums sound. I suppose hard-core followers could argue over which drummer is better, Loomis or new guy Kelly Halliburton (no relation to Dick Cheney), but I don't see a major difference. The important thing is there was no cheesy attempt to update or "modernize" the sound. And Fred is still writing some memorable songs.

"Buried Alive" is a grungy stomper (this is probably an obscure reference, but the arrangement reminds me of L7's "Diet Pill") telling a story of "sinister science." Fred sings of a nightmare future where bio-electronic implants are used to "improve" people.

"My spirit's in a ditch, a machine's replacing me/They can make me even better than how I used to be," he sings. "It doesn't make mistakes, it doesn't get confused/It doesn't eat or drink or think or feel it's being used."

In "Down to Earth," an emotional cruncher in which the guitar and drums remind me of some Crazy Horse tune, Toody sings of her mixed feelings about being a rock 'n' roll granny:

"Once upon the stage nervousness and age hit me like a plague/I've told myself before/Can't do this anymore/It's hard to walk away/Guess it's in my blood, I still can't get enough enough/It's what I've come to love."

My favorite here is "Paranoia," a snarling slow-burner given an almost playful bounce by Toody's bass. Fred sounds downright paranoid as he screeches about shadowy enemies coming after him. I'm also fond of "On the Move," especially when Fred and Toody do some call-and-response vocals, and it's hard to immediately tell who is who.

It's refreshing to see a good example of rockers not becoming old softies after a few decades. But actually, it's missing the point to emphasize their age. Fred and Toody are clearly possessed of a spirit that's beyond the strangling hands of time. May they ever rock.

Cool Pierced Arrows links: You can find five free and legal tracks from the Arrows' first album, Straight to the Heart, at the Free Music Archive. And while you're there, check out a live Dead Moon show on WFMU in 2001 at the archive.

Meanwhile, the entire Descending Shadows album is streaming at piercedarrows.com and at Vice Records. And for that Fred and Toody interview I mentioned, go HERE. And, of course there's their MySpace page.

Quality radio: I'll pierce your lollipop this week on Terrell's Sound World, freeform weirdo radio, in a little tribute to Fred Cole's career. That's 10 p.m. Sunday on KSFR-FM 101.1. It's streaming and screaming on the Web
at February 25, 2010