LET IT ALL HANG OUT 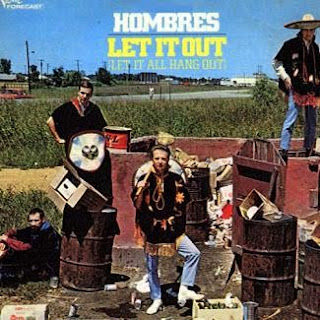 Here's a cool little feature on what for the past 14 years or so has been the opening theme song of my Sunday night radio show Terrell's Sound World on KSFR -- Let It Out (Let it All Hang Out) by The Hombres. (Thanks, and a tip of the hat to T. Tex Edwards.)
CLICK HERE
I'd never realized before that Huey Meux, the infamous Crazy Cajun who also produced The Sir Douglas Quintet, was involved with The Hombres' greatest (and only) hit.
Some more Hombres trivia from the AllMusic Guide: "Hang Out" co-writer and Hombres organist B.B. Cunningham was the brother of Bill Cunningham, who was in The Box Tops with Alex Chilton.
And before they became The Hombres, they were the touring band for Ronnie & The Daytonas ("Little GTO")
Inspiration for"Let it All Hang Out"? "Cunningham admitted in a Goldmine interview that their original inspiration for the song had been Dylan's `Subterranean Homesick Blues,' which they regarded as a goof masquerading as something profound

This gives me an excuse to reprint Chuck Eddy's thoughts on this song:

"In 1967, The Hombres, a Memphis garage-frat foursome with blood-alcohol levels too high to drive, had a one-shot rap hit with "Let It Out (Let It All Hang Out)." It opens with what almost sounds like a digital sample, namely a preacher railing against, "John Barleycorn, nicotine, and the temptations of Eve." Then somebody farts, then a guitar riff taken from the Shadow of Knights' "Gloria" kicks in, and is repeated hip-hop style through the entire song. The singer anticipates what Beck would sound like in the distant future by drawling a ridiculous Dylan parody that compares Galileo with an Eagle Scout and warns against parking near sewer signs. ..."

Chuck Eddy from The Accidental Evolution of Rock 'n' Roll, (1997)