A version of this was published in The Santa Fe New Mexican
March 5, 2010 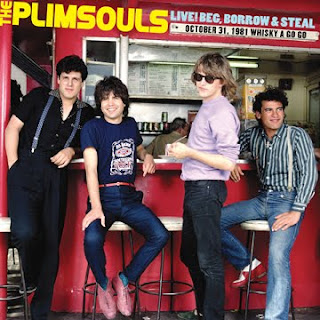 The Plimsouls are one of those rock ’n’ roll bands that never quite achieved mega-success at the commercial level. But nearly 30 years after they broke up, their adherents claim that they were one of the most vital groups of all time.
Those who believe that — and I’m one who has slowly been drifting to that conclusion — have some fresh new evidence for that argument, a newly released concert album titled Live! Beg, Borrow & Steal. Recorded Halloween night in 1981 at the Whiskey a Go Go in Los Angeles, it captures the band at the height of their considerable powers.
So who were these guys?
The Plimsouls were a quartet led by singer Peter Case, who had previously played with a punk-rock unit called The Nerves. (And before that, he was a street busker in San Francisco, where, Case told me several years ago, none other than Dan Hicks used to harass and harangue him as he tried to sing for tips on the streets of North Beach.) Case has since gone on to establish himself as a respected singer/songwriter and contemporary folk singer.
In the fertile L.A. punk/New Wave scene of the late ’70s and early ’80s, The Plimsouls became major contenders. With Eddie Muñoz on guitar, Dave Pahoa on bass, and drummer Louie Ramirez, the Plims created a sound with the chaotic energy of punk rock but featuring hook-heavy melodies with nods to mid-’60s folk-rock and soul (their first EP, 1980’s Zero Hour, had a cover of Otis Reddings’ “I Can’t Turn You Loose”). Rodney Bingenheimer championed their signature tune “A Million Miles Away” on his KROQ radio show (the song was later included in the cinematic classic Valley Girl). And somehow it got tagged with the label “power pop” — which might put off some potential listeners wary of anything pop.
After their maiden album on the independent Planet Records, the Plimsouls got snatched up by Geffen Records. Their one-and-only major-label outing, Everywhere at Once, contained some of their classic songs. But I found it way overproduced in a glitzy, ’80s kind of way.
The band broke up soon after the release of Everywhere at Once. Case was becoming more and more interested in his folk and blues roots and less and less enthralled at the prospect of leading a rock band.
Every decade or so, The Plimsouls reunite. They recorded an album of new songs in the mid-1990s — the criminally neglected Kool Trash. Though I never got to see them in the ’80s, I’ve been fortunate to see them in 1996 and 2006 at the South by Southwest Festival. The latter show was held in perhaps the most jam-packed bar I’ve ever been in. Both shows are among the most high-charged and energetic I’ve ever seen.
For my money, the best Plimsouls albums are the live ones — this new record, and 1988’s excellent One Night in America. While listening to their albums is not the same as seeing them live, you still can hear the sweat.
If you’re a Plimfan, chances are your favorite song by the group is on Live! Beg, Borrow & Steal. “Million Miles” is here, of course, as well as perhaps the finest version of “Zero Hour” I’ve ever heard and a not-too-shabby “Lost Time.” The set starts out with “Hush Hush” and moves straight to “Shaky City,” which sounds like some unknown old Yardbirds tune mutated with some unexpected chord changes. One of the standouts is “I Want You Back.” No, it’s not the Jackson 5 hit. It’s a Case original and perhaps as closes to rockabilly as the Plimsouls ever sounded.
In addition to their original tunes, the Plimsouls honor their forefathers with several hopped-up covers of early rock ’n’ roll classics. Bo Diddley’s “Who Do You Love” sneaks in on a medley. The group pays tribute to the early L.A. Chicano rockers Thee Midnighters with a frenzied take on “Jump, Jive, and Harmonize.” There’s Larry Williams’ “Dizzy Miss Lizzy,” which was most famously done by the Beatles (this one also appeared on One Night in America).
And there’s a real treat. The Plimsouls are joined by The Fleshtones, who apparently were the opening act that night, on spirited covers of Gary “U.S.” Bonds’ “New Orleans” and Little Richards’ “Hey Hey Hey.” There’s an uncredited sax player who seems to come out of nowhere on “New Orleans.” Is it the late Gordon Spaeth, who frequently played with The Fleshtones? I hope this live album will spark enough interest to bring about a new Plimsouls reunion. This music is timeless and welcome in any decade.
Check out The Plimsouls at Alive Records. And there are songs and videos at their MySpace page, even though nobody’s updated the site in two or three years.
at March 05, 2010