A version of this was published in The Santa Fe New Mexican
March 26, 2010

With The Big To-Do, The Drive-By Truckers continue their run as probably the most consistently strong, consistently good band working today.
They sound as tough as ever, with three fine singers and loud guitars. They tell riveting stories and are not afraid to be funny or get sentimental when it’s called for. They’ve even stuck with artist Wes Freed, whose colorful, magical mystery Southern Gothic style makes him my favorite album-cover artist working today. 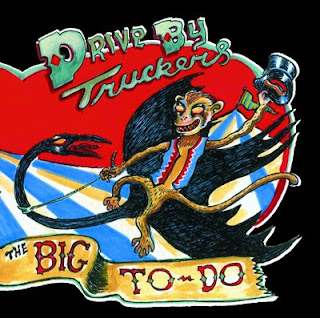 In the liner notes, Trucker Patterson Hood says that unlike other Trucker albums, there wasn’t supposed to be an overall theme or story line on this record. “Yet as we sit down to sequence, it somehow seems to imply otherwise.” (I love a band that’s not afraid to honestly comment on its own work.)
The first tune that grabbed me was “Drag the Lake, Charlie.” It’s a loose and funky upbeat song sung from the perspective of a small-town law enforcement officer (think Andy or Barney in Mayberry). The song is funny at first, with the narrator worried about the wrath of Wanda, the wife of philandering ne’er-do-well Lester, who’s missing. “Better keep your fingers crossed and hope we find him drowned/Wanda’s gonna come and kill us all if he shows up in town.”
But as the song progresses, so does the darkness. “Remember what happened last time Lester went on the make?/I heard it took the cleaning crew two weeks to clean the bar/They never found that teenage girl/They never found the car.”
The Truckers have always excelled at crime songs, and it’s a real double punch when “Drag the Lake” is followed by “The Wig He Made Her Wear.” This one is ripped straight from the headlines; it’s the story of Mary Winkler, who was found guilty of voluntary manslaughter for killing her husband, the Rev. Matthew Winkler, in 2006. As reported by the Associated Press, “Jurors were shown a pair of tall platform shoes and a black wig Winkler said that she was pressured to wear during sex.”
Hood sings:

Mike Cooley is responsible for “Birthday Boy,” the tale of a world-weary small-town stripper/hooker. “You got a girlfriend, don’t you, boy?/Nervous hands can’t lie/Married men don’t ask how much, single ones ain’t buying.”
“Get Downtown” is a funny rocker that starts off, “Kim said ‘Jimmy you better get yourself up off of that raggedy couch/I’m too pretty to work and I’m tired of you uglying up my house.’ ” The crunchy, fuzzy production adds to the pleasure.
Probably the most sonically stunning track on To-Do is Shonna Tucker’s “You Got Another.” The subject matter is hardly original — “You got another and you’ll go to her” — but Tucker sings with an ache and rage that makes it sound as if she’s the world’s first victim of sexual infidelity (which of course is just how it feels if it happens to you). The songs starts off slow and spare, with Tucker singing over piano and Hood coming in for harmony in the refrain.
At first, it reminded me of Lucinda Williams’ “Broken Butterflies,” sad and somewhat otherworldly. But then the rest of the band comes in and the music builds — the sob of the opening verse becomes a growl and then a roar. And Tucker’s voice remains the most powerful element of this song. And, by golly, there’s even a song called “Santa Fe,” (hey, I live there!) which Hood says he wrote here (“before and after sound check”) while in town for a show in June 2008.
Unfortunately, it doesn’t really say anything about Santa Fe: “You said that you’d be waiting for me here in Santa Fe.” It could be about any town with three syllables for its name. In fact, if I had to pick the weakest song on the record, I’d have to set aside hometown pride — though John Neff deserves some credit for a tasty steel-guitar solo.
“Our album begins with a song about a little boy missing his dad and ends with a father missing his children,” Hood writes in the liner notes, referring to his song “Daddy Learned to Fly” and Cooley’s “Eyes Like Glue” — a sweet and sad one.
But the true climax of the album is “The Flying Wallendas.” Yes, it’s the story of the famous circus family of acrobats, who provide a classic symbol for showbiz. The Wallendas were amazing performers, but sadly they’re probably best known for the tragic incident of Jan. 30, 1962, when two members of the act were killed and another paralyzed after they fell while performing in Detroit.
“And they fell to the ground with the greatest of ease/And three didn’t get up from the blood in the breeze,” Hood sings. And yet the Wallendas kept going. They performed the very next night. I saw them as a child a few months later. Patriarch Karl Wallenda kept performing until 1978, when he fell to his death from a high wire in Puerto Rico at the age of 73. “They never would stop and they never surrendered/And they lived like they died, The Flying Wallendas,” Hood sings.
Let’s hope the Drive-By Truckers keep flying too.
at March 25, 2010