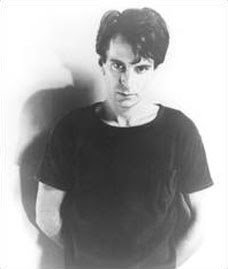 * Like Flies on Sherbert by Alex Chilton. I downloaded this the night after Alex died. I'm still coping with the concept of losing Jim Dickinson and Alex Chilton within a few months of each other. What a loss for Memphis music -- though I'm sure Memphis not only will endure but prevail.
I was a fan of the Box Tops -- "The Letter" was a hit when I was in junior high and somehow memories of the Oklahoma State Fair are tied up in that song for me. And I was a fan of lots of the bands Alex produced -- The Replacements, The Cramps, etc.
But I wasn't that huge of a Big Star fan. Their sound always seemed just a little too pretty for me.
If you agree with me on that -- and please spare me the hate mail if your don't-- this album, recorded in the late '70s, is a twisted treat. It's roots rock for the criminally insane -- mutant blues and inspirational slop. True AllMusic's Stephen Thomas Erlewine called this "a front-runner for the worst album ever made." I don't care. I like it.
Chilton obviously foresaw the rise of punk-blues here. Jon Spencer, Bob Logg and half the bands on Voodoo Rhythm probably owe him a debt of gratitude. I love the lazy boogie shuffle of "My Rival" colored by Ubu-like electro-noise and "Hey! Little Child" which almost sounds like he hired The Shaggs' drummer Helen Wiggin to sit in.
The title song sounds like some Electric Light Orchestra tune being torn apart by wild dogs.

He also does a cowpunk assault on country music on songs like "Waltz Across Texas," "No More The Moon Shines On Lorena," (an old Carter Family song about slaves I suspect has roots in minstrelry) and "Alligator Man," in which Chilton sounds more like Alfred E. Neuman than Jimmie C. Newman.
But my favorite here is "Baron of Love Part II" feature a crazed Ross Johnson, Tav Falco's drummer, on a stoned rant. (This song also is available on Johnson's own compilation Make It Stop!: The Most of Ross Johnson.)
R.I.P. Alex. You rarely failed to surprise. 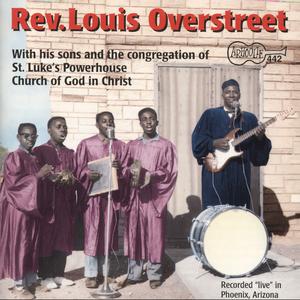 * His Guitar, His Sons And The Congregation Of St. Luke's Powerhouse Church Of God In Christ by Rev. Louis Overstreet. Here's some raw, rocking gospel from Arizona (!) recorded in the early '60s by Arhoolie Records' Chris Strachwitz.
Before he settled in Phoenix, Overstreet, a Louisiana native traveled throughout the South and West as a street preacher and musical evangelist. He sang playing electric guitar and bass drum, backed up by a joyful vocal group made up of his four sons . In 1961, he became pastor of the St. Luke's Powerhouse Church of God in Christ. (I don't think that particular congregation exists anymore. I found 10 other Churches of God in Christ in Phoenix, but no St. Luke's Powerhouse.)
"Powerhouse" was a fitting name. Overstreet bellowed his praises of the Lord. It's no exaggeration to say that you can hear the spirit at work, especially in the lengthy and frenzied "Holiness Dances."
This version of the album includes the original 1962 recordings, but some additional recording by Strachwitz, including several recorded at Overstreet's home in which the preacher plays acoustic guitar.

* Born Losers by The Stomachmouth. Before there was The Hives, The Stomachmouths were your favorite band --at least for garage rock fans in Sweden in the 1980s.
This is a compilation of Stomachmoth hits, plus a couple of tunes from frontman Stefan Kery's post-Stomachmouths bands, The Mongrels and The Toneblenders. (Thus the "various Artists" tag by eMusic.)
The music is good basic Fuzz & Farisa very Seedsy, very Standellish, with proper nods to The Yardbirds and "I'm Not Your Stepping Stone." My favorite tune has to be the appropriately titled "Wild Trip."
For a history of The Stomachmouths CLICK HERE

* Showtime by Ry Cooder. Here's one I remember from the mid '70s. Following his wonderful Chickenskin Music album, in which he introduced Flaco Jimenenz and Hawaiian giants Gabby Pahinui and Atta Isaacs, Cooder took to the road with The Chicken Skin Revue, a band that included Flaco and soul singers Terry Evans, Bobby King, and Eldridge King.
There's a sad, slow version of Blind Alfred Reed's "How Can a Poor Man Stand Such Time and Live?" I still like The Del-Lords' stomping version the best, but this version hits from another direction. Also worthy is "Dark End of the Street" featuring Evans and Bobby King on vocals and Ry's slide guitar. And you can't go wrong with "Jesus on the Main Line," a longtime Cooder favorite.
But the reason I downloaded this is because of the ones in which Flaco and his magic accordion are spotlighted -- "Volver, Volver" (almost as good as the version by the late Chris Gaffney with Billy Bacon) and the medley of a polka called "Viva Seguin" and Woody Guthrie's "Do Re Mi." Woody surely would have appreciated his Okie migration classic being slyly transformed into an anthem for a new group of California-bound migrants also lacking in the Do-Re-Mi.
PLUS:
* Two songs featuring the team-up of The Dubliners & The Pogues. I picked up "The Rare Auld Montain Dew" and "Irish Rover," which I played on my Irish music special on Terrell's Sound World a couple of weeks ago.
at April 07, 2010