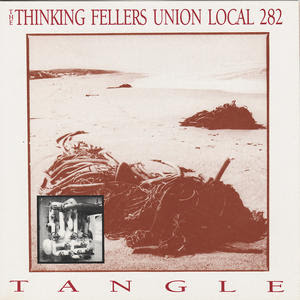 * Tangle by Thinking Fellers Union Local 282. This band truly is one of the major lost gems of the '90s, one of the most unjustly overlooked groups of their era. And this album (their second) is so overlooked, I overlooked it myself. For some reason I thought I had all their albums. Somehow I never had this one until now.
I first stumbled across the Fellers back in 1991 -- the Summer of Grunge! -- when I was up in Seattle to go to a wedding. They were headlining a bill of fellow unknowns at a little club called The Off Ramp. Their strange, discordant, yet lovably goofy sound twisted my head off. Describing that night in a review of another TFUL282 album back in 1996, I wrote, "I was amazed at how joyful and childlike the Fellers were, not in a self-conscious or cloying way as they created their musical magic, how they could be sweet and ear-wrenching at the same time. I'd never realized before that night that a mandolin could be used as an audio assault weapon."

In Tangle, I hear echoes of Captain Beefheart, The Fall, maybe even a little Husker Du. But mainly I hear that crazy band I loved so much at the Off Ramp nearly 20 years ago. 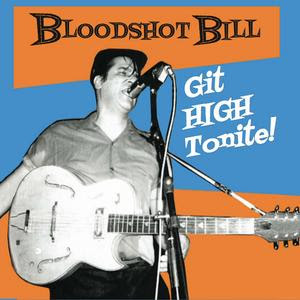 *Git High Tonite! by Bloodshot Bill. He's a one-man rockabilly band from Montreal. He's a crony of both King Khan and BBQ, and allegedly even has his own brand of hair gel called "Nice 'n' Greasy," and -- like me -- he's a major Roger Miller fan. Sometimes you can hear it in his voice.
Although he rose from the punk scene, Bloodshot Bill does not play "psychobilly." You can feel the love and respect he's got for the rockabilly tradition. No metal riffs, no songs about werewolves or zombies (at least not on this album) .
But like the late great Ray Condo, you can hear the "psycho" in his vocals, his hiccups, his yodels.
I'm looking forward to a couple of upcoming CDs on Norton Records featuring this guy -- The Ding-Dongs with Mark Sultan (aka BBQ) and Tandoori Knights with the King (Khan, that is.) 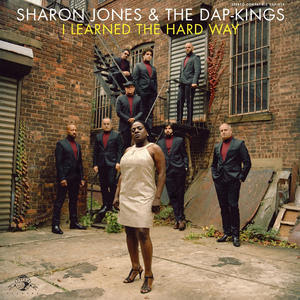 * I Learned the Hard Way by Sharon Jones & The Dap Kings. I wouldn't call this "over-produced," but Sharon's fourth album with the Dap-Kings is noticeably more polished than he previous efforts. There's strings and vibes and background singers, more obvious references to Motown -- pretty classy stuff, though I prefer Jones and the Daps more gritty and less sweetened,
It took me a few tracks to start to sink into Hard Way. But it was worth it. There's some fine tunes here.
"Money" kicks off with a mini-sermonette about the recession woes, the message here basically is the same as other songs of similar titles - she needs MONEY! "Mama Don't My Man" is nice and basic -- just a guitar, some foot-stomps and some background singers. I bet somewhere there are Shirelles demos that sound a lot like this.
But by far the strongest here, and one of the best Sharon's ever done, is "She Ain't a Child No More," a tragic story of abuse and growing up too fast.
See for yourself. Here's Sharon and the lads performing this song recently on The Colbert Report. 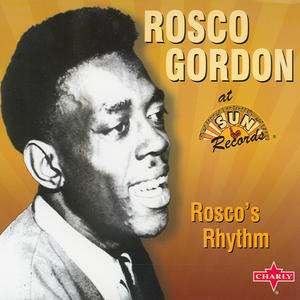 * Rosco's Rhythm by Rosco Gordon. You gotta love eMusic. Believe it or not, this, album is classified as "electronic experimental."
And no, it's not ska either, although Rosco's shuffling piano rhythms have been credited with inspiring a generation of Jamaican musicians.
But in reality, it's good basic R&B from the '50s. Rosco started out in Memphis where in the late '40s he was in a group called The Beale Streeters, which included B.B. King, Bobby "Blue" Bland and the late great Johnny Ace.
This generous album (30 tracks!) includes Gordon's earliest singles, "Bootin'" and "No More Doggin'," as well as the hilarious "Weeping Blues" and his novelty hit "Do the Chicken." And hey, Roy Head fans, check out Rosco's original version of "Just a Little Bit."

* The Very Best of The Boswell Sisters More than 40 years before Dan Hicks gave the world The Lickettes, there were the lovely Boswell Sisters from New Orleans. Connee, Vet and Martha Boswell and their snazzy, jazzy harmonies are nothing short of immortal. The Andrews Sisters identified the Boswells as a major influence, while Ella Fitzgerald was an admirer of sister Connee's vocals.
The girls began singing on the radio in the mid 20s and started recording for the Victor label in 1930. Their first hit, "When I Take My Sugar To Tea", (included on this collection) was from a Marx Brothers movie, Monkey Business. In 1932 they appeared with Cab Calloway and Bing Crosby in a movie called The Big Broadcast. And they were even featured in a Max Fleischer cartoon. "Sleepy Time Down South," (unfortunately not included here.) Their career was short. The act broke up in 1936 when both Martha and Vet got married and retired. Connee continued on as a solo act, recording well into the '50s.
The "Shout! Sister Shout!" on this album is not the song by Sister Rosetta Tharpe, but it's still wonderful. "Heebie Jeebies" is the Louis Armstrong tune. One of the coolest here is "Crazy People," which I'm surprised more people haven't covered. Take a gander below.