TERRELL'S TUNEUP: AFTER THE VAMPIRES FLEE

A version of this was published in The Santa Fe New Mexican
April 23, 2010 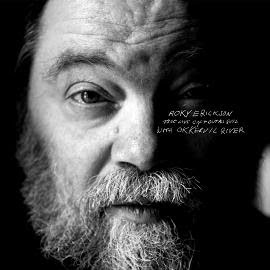 This is music for the closing credits — when the stake his been driven through the vampire’s heart, when the last zombie’s head has been blown off, when the sun is rising and the ghosts all fade.
I’m talking about True Love Cast Out All Evil, the new album by Roky Erickson, his most recent comeback album (the first in 15 years or so). Recorded with the Austin band Okkervil River, this record is a sweet statement from a battered soul, a musical chronicle of triumph over mental illness and years in the psychic wilderness.
That’s the good news. The bad news for those of us who love Erickson for his crazed psychedelic rockers is that there aren’t nearly enough crazed psychedelic rockers here and too many gentle reflective ballads. True Love Cast Out All Evil might be seen as proof of the truth in the old Tom Waits line, “If I exorcise my demons, well, my angels might leave too.”
Back in the mid-’60s, the Texas-born howler was the singer and frontman for The 13th Floor Elevators. Although the group only had one actual hit, “You’re Gonna Miss Me,” which it performed on American Bandstand, 13th Floor was influential far beyond that. The group is credited with being the first to use the word “psychedelic” to describe its sound.
And Erickson was the true psychedelic ranger, taking hallucinogens like they were Lay’s potato chips. In 1969, he got busted for marijuana in Texas, which at the time had some of the nation’s most Draconian drug laws. He pleaded insanity to avoid prison and spent three years in a state forensic hospital, where he was treated with electroshock therapy.
By most accounts, including his own, Erickson came out crazier than when he went in. But as seen in the 2005 documentary You’re Gonna Miss Me, his mental health began to improve when his younger brother intervened. Erickson has been performing now for several years. And, according to the liner notes of the new CD, he bought a house and car and is living with his first ex-wife and his son — from whom he had been estranged for years and who is now his road manager.
Much of True Love Cast Out All Evil deals with Erickson’s years in hell.
In fact, the first song, “Devotional Number One” is a below-lo-fi tape of a tune he wrote in Rusk State Hospital. This is one of several on this album that were written during his stay there. It’s a sweet melody about Jesus meeting Moses, with Erickson singing in a near falsetto. By the time he earnestly sings my favorite line in the song (“Jesus is not a hallucinogenic mushroom”), you begin hearing the slow creep of (recently overdubbed) keyboards and ambient cacophony taking you into the present.
This is followed by a short gospel-flavored tune, “Ain’t Blues Too Sad,” in which he sings, “Electricity hammered me through my head/Until nothing at all is backward instead.”
Such references to time in jails or mental hospitals are woven throughout the album’s lyrics. On “Be and Bring Me Home,” he sings, “They said I might need their dirty prison/But I love the way you don’t give me time,” he sings.
The saddest one of these is another one he wrote while actually at Rusk, "Please Judge." It appeared in a more genteel version on Erickson’s previous comeback album, All That May Do My Rhyme. The new version has a weird Sparklehorsey arrangement. It sounds as if it were recorded in a wind tunnel with Erickson’s vocals accompanied, in the first verses, only by electric piano. Gradually you start hearing noises from a thunderstorm, electronic feedback, and random noises that ebb and flow. There are a couple of decent rockers here. “Goodbye Sweet Dreams” is a terse minor-key tune with images — a pentagram, a clock striking midnight — that make it sound like an outtake from Erickson’s greatest album, The Evil One. I’m not the first to compare this song to something by Fleetwood Mac. It’s easy to envision a crazy Lindsey Buckingham guitar solo in it.
Even more powerful is “John Lawman.” You know it’s going to be a classic Roky song when it starts off with “I kill people all day long, I sing my song.”
The trouble is, there are just not enough songs like these. From this point, the album simply loses steam. “John Lawman” is followed by the title song, which is pretty but plodding. And that’s the case with the four remaining songs.
Another “field recording” from Rusk, “God Is Everywhere,” puts the album to bed. But many listeners will be asleep before they get there.
I don’t know whether Erickson wanted a relatively mellow album or Okkervil River talked him into one. But he’s past 60, he’s been through a lot, and he deserves to make whatever kind of music he wants. As “John Lawman” — not to mention his shows in recent years with his road band, The Explosives — demonstrates, Roky can still rock.
Now that the comeback album is out of the way, maybe Roky will cut loose on the next one. 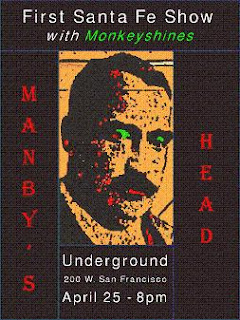 * Manby’s Head. If you’ve recently listened to Terrell’s Sound World (10 p.m. Sundays on KSFR-FM 101.1) or heard my latest Big Enchilada podcast, you’ve heard a cool garage band from Taos called Manby’s Head.
The group’s guitarist, Peter Greenberg actually has a fancy pedigree, having played in such bands as The Lyres and, most impressive to me, Barrence Whitfield & The Savages. He joined up with guitarist Michael Mooney, bass player Paul Reid, and drummer Eric Whitlock.
The group is named for Arthur Rochford Manby, a British immigrant and Taos huckster who, at least according to legend, was murdered and decapitated in his Taos home in 1929.
The band has released a six-song EP of bitchen originals, my favorite being “Licking the Frog,” plus a cover of “Come Back Bird,” an obscurity by a ’60s Texas band called Chevelle V.
You can find it for sale at www.myspace.com/manby39shead.
Or better yet, buy it from the band at its Santa Fe debut gig. The group is playing with the rollicking Santa Fe band Monkeyshines down under in The Underground (the basement of Evangelo’s, 200 W. San Francisco St., 982-9014), at 8 p.m. on Sunday, April 25. The cover charge is $5.
at April 22, 2010