TERRELL'S TUNEUP: A GHOST IN THE ALLEY

A version of this was published in The Santa Fe New Mexican
April 2, 2010

The singer didn’t really sing. He spoke, sometimes almost shouted, the lyrics over a funky bass line and a funky flute. 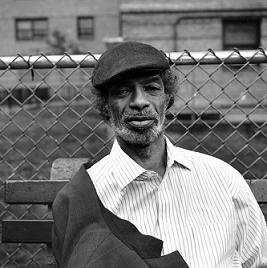 It was the dawn of the ’70s, and it was like nothing I’d ever heard before. The Black Panthers hijacking a beatnik poetry reading? H. Rap Brown fronting a soul revue? “The revolution will not be right back after a message about a white tornado, white lightning, or white people. ... The revolution will not be televised.”
After years in the shadows — 16 years since his previous studio album, Spirits, which was his first record in 12 years — Gil Scott-Heron is back with more harrowing songs on a new album called I’m New Here.
A decade after “The Revolution Will Not be Televised,” Scott-Heron would be hailed as one of the major harbingers of hip-hop. With “Televised” and songs like “Whitey on the Moon” (“A rat just bit my sister Nell, with whitey on the moon”), Scott-Heron inspired a generation of politically conscious rappers (think Public Enemy, Kool Moe Dee, and KRS-One).
He even had a string of hits that penetrated the R & B charts in the mid- to late-’70s. Some of these, like “Johannesburg,” “Winter in America,” and “Angel Dust,” could sometimes be heard on rock radio, which back then was basically as segregated as a Mississippi country club.
But despite his successes, Scott-Heron didn’t enjoy a life of ease. He spent much of the last couple of decades struggling with drug addiction and the past 10 years or so behind prison walls for drug charges.
I’m New Here, produced by Richard Russell, is harrowing. It’s mostly low-key and somber and almost like an encounter in a dark alley with a ghost. The album kicks off with an autobiographical spoken-word piece, “On Coming From a Broken Home.” It’s a touching tribute to his grandmother, who raised him in Tennessee.
“Lilly Scott was absolutely not your room-service, typecast black grandmother ... and I loved her from the absolute marrow of my bone,” Scott-Heron says over a musical backdrop that sounds like a distant interplanetary transmission of a blaxploitation movie soundtrack. “Women raised me, and I was full-grown before I knew I came from a broken home.”
But the sweet memory ends with the death of Lilly Scott — “and I was scared and hurt and shocked.” The music gets louder, the beat turns harsher, and suddenly Scott-Heron finds himself in an electronic mutation of one of Robert Johnson’s most frightening blues, “Me and the Devil.”
He actually bowdlerizes one of Johnson’s lines. Unlike the venerated bluesman, Scott-Heron doesn’t “beat my woman until I’m satisfied.” He just “sees” his woman until he’s satisfied. I bet the lessons of Lilly Scott had something to do with that little change. But the song is no less intense It’s been made, along with “Your Soul and Mine,” into a cool black-and-white video that might be described as hip-hop noir. You can find it
That’s not the only classic tune Scott-Heron transforms on this album. He takes on Bobby “Blue” Bland’s masterpiece, “I’ll Take Care of You.” Russell provides the otherworldly musical accompaniment featuring a string section on top of the electronica. And Scott-Heron’s voice, which has grown raspier through the years, sounds more like his heyday voice on this song. The old warble, almost suggesting a yodel, is back.

The title song is written by indie singer-songwriter Bill Callahan, who performs under the name Smog. Scott-Heron recites the verses and sings the choruses as a pensive acoustic guitar plays in the background.
One of the strongest selections on I’m New Here is “New York Is Killing Me.” In this original song, Scott-Heron sings a blues melody over persistent hand claps and a clacking rhythm, punctuated by bass drum. At a couple of points, the Harlem Gospel Choir comes in but disappears like a dream figment. “They got eight million people, and I didn’t have a single friend,” he sings.

The album ends with a reprise of “On Coming From a Broken Home,” this time with Scott-Heron expressing sympathy for the families of soldiers who have been killed in battle, as well as those of police, firefighters, construction workers, pilots, and truckers “who have lost their lives but not what their lives stood for.”

I’m New Here is less than 30 minutes long. But it’s one intense half hour.
BLOG BONUS:

Here's that video I mentioned above: