A version of this was published in The Santa Fe New Mexican
April 9, 2010 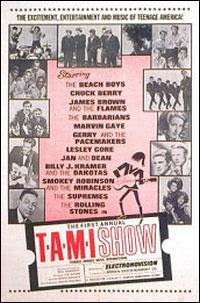 The Teenage Awards Music International Show might sound like a tacky Nickelodeon special in which some Hannah Montana wannabe gets green Jell-O poured on her head. But it wasn’t. The T.A.M.I. Show, as it was known, is nothing short of one of the lost treasures of rock ’n’ roll, a live concert film that has been missing in action for nearly 45 years. Until now.
The Shout Factory has released a “Collector’s Edition” of The T.A.M.I. Show in all its black-and-white glory. And all the stars are there. Lesley Gore! Billy J. Kramer & The Dakotas! And best of all ... Gerry & The Pacemakers!
And also a few others like James Brown, The Rolling Stones, Chuck Berry, The Beach Boys, Marvin Gaye, Smokey Robinson & The Miracles, and The Supremes.
It was filmed live in Santa Monica Civic Auditorium in October 1964 — with Shindig/Hullabaloo-style go-go dancers and a house band featuring top L.A. studio cats, including Leon Russell and Glen Campbell — and was in theaters across the land two weeks later.
I saw this movie in a theater in late 1964 or early 1965, when it first came out. I was in sixth grade, and to cut to the chase, James Brown’s crazed performance of “Please, Please, Please” — the now famous routine in which he falls to his knees screaming like a man possessed and an aide puts a cape around his shoulders, helps him up, and tries to lead him offstage — made an imprint on my psyche that still burns.
I’ve complained for years that The T.A.M.I. Show was unavailable. Until now, it never made it to DVD — heck, it never made it to VHS — at least, not legally. According to the liner notes, the holdup apparently was the fault of The Beach Boys, who sued to get their four songs removed from copies of the film, for reasons that aren’t clear. Some performances have popped up on YouTube here and there — usually removed by the secret masters of the music industry. But not since the 1960s has T.A.M.I. been available in its entirety.
It’s almost as good as I remember it. 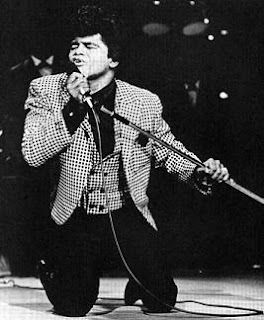 Even though several of the acts seem dated (Billy J. who?), it was a pretty good cross section of rock ’n’ roll in 1964. There are British Invasion groups, Motown, Southern soul, old masters, teen pop (love the hair, Lesley), California surf (though no Dick Dale-style instrumental music, which we now know as “surf”) — even a representative of what would later be called “garage music” with The Barbarians.
Music writer Don Waller makes a sociological observation in his liner notes: “At a time when — after weathering a 57-day filibuster — the passage of the Civil Rights Act of 1964 had just put an end to legal segregation, it’s worth noting that almost half the stars of The T.A.M.I. Show were then what would be politely referred to as ‘Negroes.’”
The songs by James Brown & His Famous Flames seem even stronger than they did when I was a wide-eyed kid in the movie theater. A lot of fine soul groups are on this bill. Smokey, Marvin (backed by female trio The Blossoms, including the great Darlene Love), and The Supremes all give superb performances that have held up well with the passage of time. Still, compared with Brown, the Motown acts seem so tame. I don’t think any record label made Brown go to charm school.
And The Rolling Stones, introduced by emcees Jan & Dean as “those five fellas from England,” weren’t half bad either. They’re all so fresh-faced, even Keith Richards. Mick Jagger was already strutting, and Brian Jones, playing an oval-shaped guitar, mugged shamelessly for the cameras. 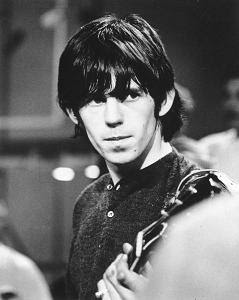 Speaking of The Stones, the theme song of The T.A.M.I. Show (co-written by P.F. Sloan, whose best-known tune was “Eve of Destruction”), contains a factual error. Listing many of the performers on the show, Jan & Dean cluelessly sing, “Those bad-lookin’ guys with the moppy long hair/The Rolling Stones from Liverpool have gotta be there.”
But there were certainly some artistic problems with this show. And I’m not just talking about Jan & Dean’s corny shtick between some of the performances.
To put it bluntly, Chuck Berry, who opens the , was cheated.
After an abbreviated version of “Johnny B. Goode,” he starts in on “Maybellene,” finishing the first verse before the song is hijacked by Gerry & The Pacemakers. This clean-cut British Invasion act performs a couple of tunes until Chuck is allowed to come back with “Sweet Little Sixteen.” For the next few songs, he alternates with Gerry & The Pacemakers.
Whose brilliant idea was this?
This band wasn’t worthy of cleaning the one-way mirrors in Chuck Berry’s mansion, much less being put on equal footing with the master.
But there are unexpected gems here too. One is The Barbarians, who would later have a dumb hit with “Are You a Boy or Are You a Girl?” and a cult classic with “Moulty,” a spoken song by their drummer Victor Moulton, who talks about losing his hand. The band was allowed only one song here (come on, they could have cut a couple of songs by Billy J. Kramer or Lesley Gore), and it’s not one of their best-known songs. But “Hey Little Bird” is a fine rocker. And hook or not, Moulty really was a fine drummer.
After seeing The T.A.M.I. Show again after all these years, I felt I needed to have someone put a cape around my shoulders and lead me away.