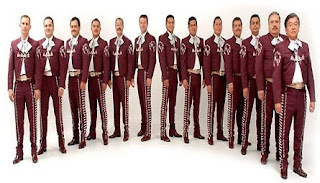 Mariachi Vargas de Tecalitlán, who Santa Fe Fiesta Council President Herman Lovato calls Mexico's premier mariachi group, will be headlining the 298th Fiesta de Santa Fe Mariachi Extravaganza at 7:30 pm, Wednesday, Sept. 8 at The Santa Fe Opera.
These guys have been around since 1897. No, that's not a typo! 1897!
From their Wikipedia site:

The Mariachi Vargas de Tecalitlan was born in a small city called Tecalitlan, to the south of Jalisco. Founded in l897 by Don Gaspar Vargas the formation during those years was provided by the guitarra de golpe (or mariachera) played precisely by Don Gaspar, the wooden harp by Manuel Mendoza, and two violins played by Lino Quintero and Refugio Hernandez. The combination of these instruments established the "Sonido Tecalitlan" which distinguished from the "Sonido Cocula". (The Mariachi from Cocula utilized the guitarron and the vihuela in place of the harp and the guitarra de golpe aside from the two violins). In 1913, Don Gaspar introduced one trumpet to the group but it was not well accepted and, in later performances, its high-pitched sound was considered annoying. The cornet was replaced by another violin. The group consisted then of five elements. The son of Don Gaspar Vargas, Silvestre Vargas, joined as a violinist in 1921.

In more recent times. this is the group Linda Rondstadt used on her Canciones de mi Padre album in 1986.
at May 14, 2010