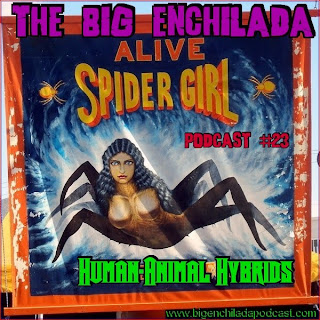 Visionary lawmakers in the great state of Arizona this year passed a law banning the production or even attempted production of human/animal hybrids. This was a courageous move, but was it too little, too late? Musicians for years have been warning us about these monsters. And now The Big Enchilada brings you the real story as told by Mississippi John Hurt, The Cramps, Alex Chilton, Tav Falco, John Schooley, Rex Allen and others. Plus wild bitchen sounds by Andre Williams, Barrence Whitfield & The Savages, Johnny Dowd, Batusis, King Salami, The Dirtbag Surfers and more.

Tricks by Andre Williams
Georgia Slop by Barrence Whitfield & The Savages
Why Do You Get So High, Shorty? by The Treniers
She's Kind of Evil by Thee Fine Lines