A version of this was published in The Santa Fe New Mexican
May 28, 2010

Andre Williams is one bad mother (hush yo’ mouth!). And he’s not afraid to tell you so himself.
This underappreciated R & B geezer has been making records since the 1950s — his most famous song being “Shake a Tail Feather” (first recorded in 1963 by a band called The Five Du-Tones, but best known from the cover versions by Ike and Tina Turner and James & Bobby Purify).

After years of hard drugs and even harder living, Williams began making a comeback in the late ’90s. And as recently as 2008, he showed he could still make a powerful album. Reviewing Can You Deal With It?, which he recorded with a band called The New Orleans Hellhounds, I wrote that Williams “gives dirty old men a good name.”
But on his new album, That’s All I Need, I hate to report that Williams is starting to show his age. It’s not a bad album — there are some pretty cool songs scattered over the 10 tracks, and even the filler isn’t terrible. But the sizzle Williams showed on Can You Deal With It? just isn’t here.
Williams recently published his first book, a collection of short stories called Sweets and Other Stories (Kicks Books, 2009). He reportedly wrote the book during a stay at a rehab center after a drug relapse. So perhaps this album catches him during a reflective period of his life.
That’s All I Need starts off slow and slinky with “My Time Will Come,” which features a snaky guitar lick from Dennis Coffey. It’s an understated tune, stark, but with an under- lying optimism.
The highlights of this record include “Tricks,” which features Williams speaking the lyrics almost like an invocation (“If you want to catch a woman, you use your brain. And I’m a scientist. ... If you want to catch a snake, you use a rabbit. And I’m a jack.”); “When Love Shoots You in the Foot”; and “Too Light to Fight” (Williams might not be that physically fit, but his trigger finger still works, he warns).
Some of the topical songs here are just too predictable. “There Ain’t No Such Thing as Good Dope” is an obligatory anti-drug song, while on “America” Williams assures us that he’s not unpatriotic “just because I sing and dance after midnight, just because I take a drink or two.” Huh?
“Amends,” the final song, features a slow groove and an acoustic guitar. It reminds me a little of Lou Reed’s “Coney Island Baby.”
I’m glad Williams is pulling his life back together. And you can’t begrudge someone in his mid-70s for slowing down. But newcomers to Andre Williams should start with some of the old stuff such as the Rib Tips and Pig Snoots: 1965-1971 compilation, the 2003 album Holland Shuffle!: Live At The World Famous Vera Club (with the Dutch band Green Hornet), or Can You Deal With It? *Fourteen Blazin’ Bangers!! by King Salami and the Cumberland Three. This is a high-voltage British garage/punk band infused with R & B sensibilities. The group is still basically unknown in this great land of ours — I got this album from a German company, Soundflat, though it’s available on the British Dirty Water label) — but I’ve got the feeling that Salami and the boys will be expanding their empire onto these shores before long.
Blazin’ Bangers is the King’s first full-length album. It has versions of a couple of the group’s previously released singles like “Do the Wurst” and the frantic “Mojo Workout.” One of my favorites is a crazy sped-up Bo Diddley romp called “Ma JuJu Girl.” Also worthy are “I Smell a Rat” and “Chicken Back.”
Salami is apparently fond of faux American-Indian surfy instrumentals in the tradition of The Shadows’ “Apache.” One of his early tracks is called “Uprising.” He uses the same opening war whoop on this album, on the song “Pawnee Stomp.” It’s politically incorrect to be sure, but nonetheless irresistible. 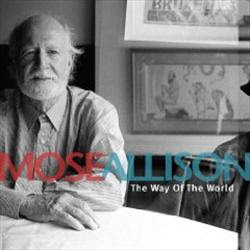 * The Way of the World by Mose Allison. Like Solomon Burke and Bettye Lavette before him, this venerated Mississippi jazz/blues singer gets the full Joe Henry tent on this, his first new studio album in a dozen years or so.
Allison is even older than Andre Williams, but at the age of 82, he’s still in fine form — both on vocals and, as he proves handily on the instrumental “Crush,” on piano. He pokes fun at his advanced age on “My Brain,” based on Willie Dixon’s blues classic “My Babe” (“My brain is always workin’/Long as you keep that coffee perkin’. ... My brain is gettin’ pounded/Pretty soon I’ll be dumbfounded”).
Allison offers a twisted view of religion on “Modest Proposal,” suggesting that God deserves a vacation. If I weren’t already familiar with “I’m Alright,” an old Loudon Wainwright III tune about surviving a bad romance, I could have been convinced that Allison wrote it himself, he does such a great job of making it his own.
Producer Henry is nothing if not tasteful. He provides Allison with a suave, understated little combo — bass, drums, guitars, and sax — just like on Allison’s best recordings, with no attempts to modernize.
The album has a cool little treat, “This New Situation,” a duet between Mose and his daughter Amy Allison, an alternative country singer. It’s short, but indeed it’s sweet.
I never thought I’d be yakking about a great new Mose Allison album in the year 2010. But The Way of the World is a true pleasure.
at May 27, 2010