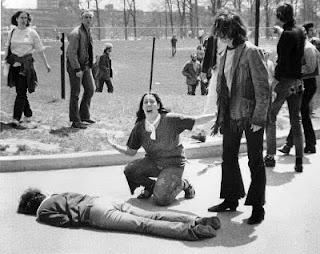 Hard to believe it was 40 years ago when the Ohio National Guard shot and killed four student protesters at Kent State University. I was a junior in high school on May 4, 1970.

What scared me even more than police firing on demonstrators was the fact that so many Silent Majority types were so callous about it. Making excuses for the Guard was one thing, but there were many expressing the sentiment that the protesters deserved to be killed.

So how would that reaction be if the same thing happened 40 years later?

Here's a story about Neil Young's song "Ohio," which Young, along with Crosby, Stills and Nash were able to crank out and get on the air within three weeks of the killings. What's amazing is that commercial radio stations actually played the damned thing. That really wouldn't happen these days.

And below is Uncle Neil singing an acoustic version.

And here's a great version by The Isley Brothers. The video isn't much to look at, but listen to the song.