This big damn band is actually a trio from rural Indiana. As locals who saw the group at the Santa Fe Brewing Company early this year know, it’s a family band — or a “fam damily” to play upon a previous album title — featuring The Rev. on vocals and slide; his wife, Breezy, on the rub board; and cousin Aaron Persinger on drums.
Even though they’re a bunch of yam dankies, the Peyton clan could pass for Mississippi Hill Country. Their basic slide/drums/washboard sound has classic Fat Possum written all over it. They play acoustic instruments, but nobody can say they aren’t high-voltage.
The burly, bearded Peyton is proud of his rural heritage. “Born Bred Corn Fed,” the opening song, celebrates a traditional way of life. “Buy a melon from a roadside stand/Honor system, leave a dollar in the can/Somebody dies, you bring their family a pie/Fire Department’s Got a Friday night Fish Fry.”
But The Wages isn’t all about country sunshine and waving fields of grain. Far from it. There’s no honor system in “Lick Creek Road,” in which Peyton sings, “Don’t answer the door without a pistol anymore.” Even more explicit is “In a Holler Over There” — not far from his own home, the singer sees starving children, meth labs, and failing farms.
Indeed, the recession permeates several songs here. “Just Gettin’ By” is one of them. And in “Everything’s Raising” (“but the wages” completes the refrain), Peyton castigates bankers, big corporations, and congressmen.
Yet despite all this seriousness and hard times, The Wages can’t be seen as a downer. There are loads of good times and plain goofiness.
Peyton is a fine storyteller. He proved that on the last album with the hilarious “Your Cousin’s on Cops,” a reportedly true account of watching TV and realizing that the poor, dumb redneck being handcuffed by officers on the television show was a relative.
There’s some similar fun on this album, especially in “Fort Wayne Zoo,” which begins with the line, “My brother stole a chicken from the Fort Wayne Zoo.” You have to wonder what kind of crappy zoo has chickens, but as you contemplate that, Peyton starts singing, “There’s a lot of crazy women living in Fort Wayne.” “Two Bottles of Wine” is a 90-mph drunken stomp. Guest accordion player Jason Webley gives the song a Cajun feel. It starts off with someone evoking The Ramones by shouting “1-2-3-4!”
The album ends with “Miss Sarah,” a sweet farewell to a woman who was queen of her own kitchen. “We’ll miss ya, Miss Sarah. Who’ll make the biscuits?” It’s a song you can imagine Doc Watson or Mississippi John Hurt singing, a low-key coda to a wild trip through the boonies.

Also recommended:
* Agri-dustrial by Legendary Shack Shakers. Here’s another band with one foot planted firmly in American roots music and another planted in punk-rock craziness.
“Agri-dustrial” is a pretty apt description e basic Shack Shakers sound. It’s rootsy but with a hard-rocking edge.
The singer and frontman, Col. J.D. Wilkes (I’m not sure which branch of the military he served in), plays a mean harmonica and occasional banjo and Jew’s harp, while co-conspirator Duane Denison, formerly of punk-noise patriarchs The Jesus Lizard, makes some crazy noise on his guitar. The rhythm section is grounded in metal as well as in cowpunk.
Like Rev. Peyton’s album, this new effort by the Shack Shakers takes a look at rural living, though Agri-dustrial deals mainly with the South. 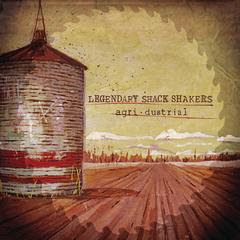 If there’s a concept here, it’s a horror story. That should be obvious by some of the song titles — “Two Tickets to Hell,” “The Hills of Hell,” and so on. And it’s apparent that the title character of “God Fearing Man” has plenty to fear. “The Hills of Hell” is especially unsettling when Wilkes, his voice electronically distorted, reads from Kentucky Book of the Dead, relating stories of crucifixions and bodies stashed in the corpses of horses.
Wilkes sings like a crazed prophet in the ominous “Greasy Creek”: “What was spoken light will be tested at night/Where the White Thing sings, the state bird bites/While you’re diggin’ up tiny extra rows of teeth/Behold the fascist Killmachine.”
The spookiest number is “The Lost Cause,” a jittery waltz featuring what sounds like a player piano from some dusty Old West saloon. Wilkes sings of a battalion of undead Confederate soldiers. But actually it’s not a ghost story; it’s a rebuking of the weird undercurrent of Confederate revisionism and glorification that’s surfaced lately with some Southern politicians.

“A company of skeletons in rags/March home under tattered white flags/Dusty Bibles and deep empty pockets/Dark dreams and deeper eye sockets/We ain’t right in the head and our women lay dead/We’re the losers who chose The Lost Cause.”