TERRELL'S TUNE-UP: WHEN THE SHARK BITES

A version of this was published in The Santa Fe New Mexican
June 11, 2010

King Shark is back. And he’s got lots of fine reggae music for Santa Fe.


Shark, aka Alphanso Henclewood, was born 52 years ago in the Greenwich Farms neighborhood of Kingston, Jamaica. It’s an area populated mainly by people who make their living in the fishing industry. But it has also produced way more than its share of musicians — the most notable probably being Earl “Chinna” Smith, a guitarist whose résumé includes work with Bob Marley, Bunny Wailer, Jimmy Cliff, Ziggy Marley, Burning Spear, Lee “Scratch” Perry, King Tubby, and King Shark. Moving from New York, Shark first came to Santa Fe about 10 years ago. (The love of a woman first brought him here, he said in a recent interview.) It was here in Santa Fe that he set up his company, Montego Records. In 2000 he released a compilation, King Shark and All Star Friends, which was recorded in Jamaica and featured tracks by artists including Prince Alla, Vicious Irie, Charlie Chaplin (a Jamaican), Michael Prophet, and Shark.

He left Santa Fe for several years. “I went to Texas,” he said. Dallas, to be exact. But earlier this year, he returned, settling down in the Pecos area. And he’s been busy.

Shark recently completed Rasta Life, a 56-minute film about the music of his homeland. He produced and directed, while Eduardo Griego edited the documentary. Opening with Chinna Smith playing bluesy jazz licks on an acoustic guitar, the film mainly consists of singers he knows doing what they do best — singing. These include artists like King Alla, Earl Zero, Pretty Rebel, Lucani, Peter Ridkind, and Ernest Wilson.

While there is some studio footage, most of these performances are spontaneous (or at least spontaneous-feeling) a capella performances. It’s lots of fun, even though those of us not fluent in Jamaican English have a hard time following some of the dialogue. The music is easy to follow, however, and that’s what really counts. This movie will be available to the public soon.

Another new treat from King Shark was a CD he gave me full of songs mostly by the musicians appearing on Rasta Life. (Among these is a new one by King Shark himself, “She’ll Be Mine,” performed in the “lover’s rock” style.)

Many of these tracks are available to download from the Montego Records website. Warning: this site is a little difficult to navigate. If there’s a way to search by artist, I haven’t figured it out yet. But the music’s good and reasonably priced — 89 cents for MP3s, $1.38 for higher-quality WAV versions of the songs.

Speaking of websites, last month Shark launched a new one, RastaLives.com. Though much of it is still under construction, several articles are up, and it has loads of biographies of the King’s musical pals.

And King Shark has been recording some music here too. Recently he’s been recording at Frogville Studios with Felecia Ford of Hundred Year Flood. (Full disclosure: I helped direct Shark and Ford to each other when King told me he was looking for a strong female vocalist.) Ford told me last week that she was doing vocals on “The Oil,” a song about the BP oil spill that she co-wrote with Frogville Records tycoon John Treadwell. The background music was recorded previously by King Shark, back in Jamaica.

So if Santa Fe ever becomes internationally famous as a reggae capitol, King Shark will surely be behind it.

Some other recommended international treats for your ears: 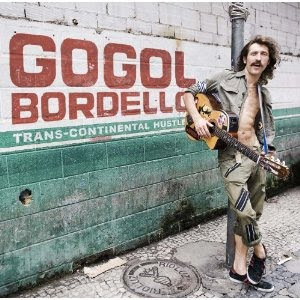 * Trans-Continental Hustle by Gogol Bordello. Eugene Hütz, the Ukrainian gypsy punk rocker behind this roving band, recently moved from New York City to Brazil. That’s why there’s suddenly a huge carnivale influence in the already multinational blend of sounds that is Gogol Bordello. The good news is that it works. Hütz and crew might be maniacal when they perform, but he’s smart enough to be subtle about adding new sounds.

Another new factor in the Gogol record is the addition of Rick Rubin as producer. That made a lot of Gogol fans worry: will the next Gogol album sound more like Slayer or Neil Diamond?

Fortunately, it sounds like neither. If anything, the acoustic instruments, especially Hütz’s guitar, seem a little more prominent than in past recordings. But there are still enough crazed rockers to keep old fans happy. In fact, in “Immigraniada (We Comin’ Rougher),” Gogol’s rhythm section has a little Slayer in it when it goes to the chorus.

My only beef here is that none of the 12 tracks instantly grabs you by the throat the way “American Wedding” did on Gogol’s previous album, Super Taranta!, or the way “Not a Crime” did on 2005’s Gypsy Punks Underdog World Strike. None of the new tracks would put a damper on a Bordello show, but none of them, at least so far, seem like an obvious contender to become a Gogol classic. 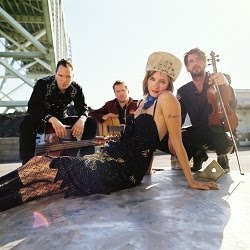 * Woman in Sin by Fishtank Ensemble. I love Little Willie John. And I enjoy an occasional Transylvanian folk tune and Kurdish fiddle stomp.

Well, here’s a group that happily plays all of the above. This Oakland-based band is led by singer/fiddler/saw-player Ursula Knudson and her husband, Fabrice Martinez, who also plays viand violin tromba, a stringed instrument that amplifies its sound through a metal resonator and metal horns. Martinez is a native of France who traveled with a real-life gypsy caravan through Europe.

Sometimes Fishtank sounds like an acoustic Gogol Bordello. Sometimes they sound more like the Hot Club of Cowtown. And every so often, such as in the 1920s-flavored “CouCou,” Knudson’s voice reminds me of Katharine Whalen of the Squirrel Nut Zippers.

Knudson sings a passable “Fever.” But my favorite is the six-minute “Kolo Suite,” a medley of traditional Serbian tunes with a Transylvanian finale that’ll make the vampires boogie.

This record is good, but I’ll bet Fishtank Ensemble is even better live. And they’re coming our way. The band is scheduled to play the Albuquerque Folk Festival at noon June 19 at Expo New Mexico (real people still call it the state fairgrounds).