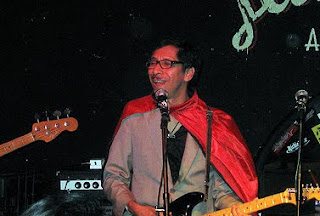 Brian Tristan, better known as Kid Congo Powers, has an impressive recording history having served time in The Cramps, Nick Cave & The Bad Seeds and The Gun Club. And his solo work, like last year's Dracula Boots, are full of under-recognized gems.

But you really haven't heard Kid Congo until you've heard him live.

I did just that at The Knitting Factory in Brooklyn. Congo played there with his band The Pink Monkey Birds as part of a free show sponsored by Vice Records. Congo has a new split single with Hunx & His Punx, who opened the show, coming out in the near future.

Mr. Powers is a hero in the garage-punk sub genre, which doesn't place the highest value on instrumental virtuosity. Nevertheless, he's an amazing guitarist who does't need 15-minute solos to prove it. One of his encore tunes was an instrumental I didn't recognize that sounded like a wild cross between Duane Eddy and "Psychotic Reaction." 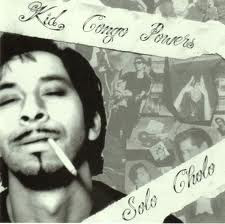 Opening his hour-long set with "I Found a Peanut," a Thee Midnighters cover and the funniest song from Dracula Boots, Congo let rip with tunes spanning his lengthy career. There were several others from Dracula Boots, including "La Llorona," (which I know would be a favorite in Santa Fe if he ever comes here), "Black Santa" and "LSDC." There were several songs from an upcoming singles compilation on In the Red Records (I believe he said the name of that's going to be "10 Greasy Pieces") and older tunes like "La Historia de un Amour."

And, yes, he did a Gun Club song, a tough version of "Sex Beat," and two Cramps tunes -- "I'm Cramped" and an extra-sinister "Goo Goo Muck."

I got a chance to yak a little wit the Kid before the show. He said he's excited because he's been asked to sing "Found a Peanut" with Thee Midnighters at the Ponderosa Stomp in New Orleans in September. I wish I could be there for that.

(No, I didn't take that photo at the top of this post. My camera was in my suitcase, which hadn't arrived before I left for the show, thank you very much, American Airlines!) So I stole that picture from my pal and fellow GaragePunk podcaster Michael Kaiser, who saw Kid Congo in California last year. Thanks, Michael.)
at July 29, 2010