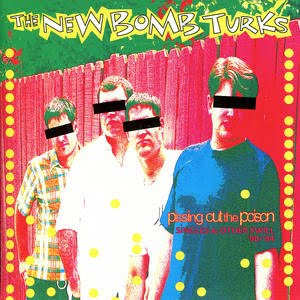 * Pissing Out The Poison: Singles and Other Swill by New Bomb Turks. I'm a relative newcomer to the NBTs. I decided to download this in anticipation of NBT frontman Eric Davidson's new book We Never Learn: The Gunk Punk Undergut, 1988-2001. a history of below-the-radar proudly uncommercial, untrendy bands like The Dwarves, The Cynics, The Mummies, Thee Headcoats, Dead Moon, The Devil Dogs, The Gories, and, yes, New Bomb Turks among others. (The book arrived and I'm reading and enjoying it now. You should too.)
This album is a compilation of singles, rarities, even a Christmas song. It's all high-charged, furious, crazy guitar rock -- what Davidson calls "Gunk Punk."
There's a handful of covers, including The New York Dolls' "Bad Girl" and a Rolling Stones obscurity called "Summer Romance." And there's strong alternative versions of Turk classics like "Crying in the Beer of a Drunk Man," "Let's Dress Up the Naked Truth," "Sucker Punch" and "Taller Crush." 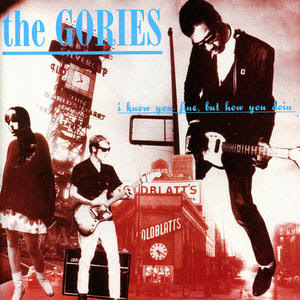 * I Know You Be Houserockin' by The Gories. Before he started The Dirtbombs, Detroit's Mick Collins was in another amazing band -- The Gories.
This was a trio featuring two guitars (Collins and Dan Kroha) and drums (Peggy O'Neill). No bass, no frills, just raw punk blues.
This compilations contains the Alex Chilton produced I Know You Fine But How You Doin' plus almost all of The Gories' first album, Houserockin' (missing only "Let Me Ear the Choir Sin.")

Hey, while fooling around on YouTube, I found an actual live video of The Gories doing one of my favorite songs from this album, "Thunderbird ESQ." Peggy looks pretty sexy chewing her gum. Check it out: 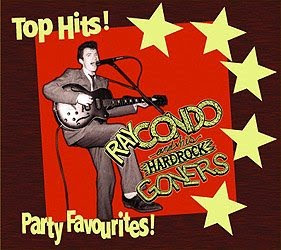 *Party Favorites by Ray Condo and his Hardrock Goners. This Canuckabilly was perhaps the finest rockabilly revivalists of the 90s and early 00s. The only one who comes close was Big Sandy, but the late Condo, who died in 2004, had a crazier edge. The title of his 1997 album Door to Door Maniac (which was an alternate title for a very obscure 1961 Johnny Cash movie)

I first came to know Condo's music when he was living in Vancouver and playing with his band The Ricochets. This album is from his days in Montreal, when he was playing with The Hardrock Goners (named in honor of hillbilly boogie monster Sidney "Hardrock" Gunter) This outfit, which had a fine fiddle player (not sure of the name) and perhaps was a bit more country sounding than The Ricochets.
There's a cool "St. James Infirmary" here as well as a version of "Her Love Rubbed Off," one of Carl Perkins' more crazed compositions, also covered by The Cramps.
But my favorite tune here is "Barroom Crazy," which contains the verse, "I broke both of my arms/I fell down on the floor/I started to dance but I lost my pants/So they tossed me out the door."
I hate when that happens. 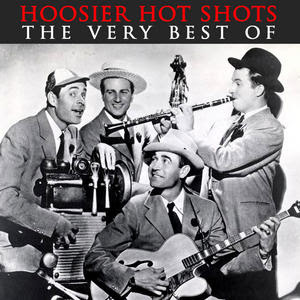 * Seven songs from The Very Best Of by Hoosier Hot Shots. True story. When I was a little kid and my grandmother was taking me somewhere, she'd say, "Are you ready, Hezzie?" She'd just laugh when I'd ask who the hell was Hezzie. A few years ago when I discovered The Hoosier Hot Shots it all became clear to me. Maybe I got my habit of making obscure cultural references from my grandmother.
When I did discover the Hotshots it made me appreciate how hip Nana actually was. (After all, she took me when I saw Cab Calloway as a kid.) These guys basically were a country string band (well they had a clarinet too) with the soul of Spike Jones.

I only had enough to get seven tracks this month, but I'll pick up the rest when my account refreshes. (This is a good one for eMusic bargain hunters. 40 track for the price of 12!)

And, by the way, Hezzie was Paul "Hezzie" Triesch, who played washboard, bells and whistles.
* "Cucaracha Taco" by Joe "King" Carrasco. I got this for my latest podcast of The Big Enchilada. I already had most of the other songs from this collection, called Yabba Ding Ding. But it looks like a great introduction to the master of Nuevo Wavo.
* "Bandy the Rodeo Clown" by Moe Bandy. I just love this song. Bandy is one of the few stars of the early '80s Urban Cowboy era of country music I can stand. I got this tune especially for my recent Rodeo de Santa Fe set on The Santa Fe Opry
at July 05, 2010