How long's it been since you've seem Felix y Los Gatos?
Well, that's too long.
Felix and the boys are having a release party for their new CD, Green Chili Gumbo this Saturday night at the Cowgirl BBQ, 319 South Guadalupe St. here in Santa Fe. Many special guests are promised.

Personally, I'm looking forward to the new album/ I've played their first one on both of my radio shows as well as one song on a Big Enchilada podcast.
There's a whole bunch of promising live shows coming up next week. 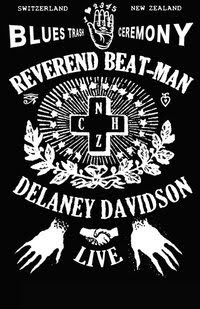 On Thursday, straight out of Switzerland, Rev. Beat-Man and Delaney Davidson play at Little Wing at the Candyman Center on St. Michael's Drive.
Then Friday, down in The Underground (Evangelos' basement) one of New Mexico's finest garage band, The Scrams are on a bill with The Kill Spectors and Angola Farms.
And start planning ahead: Coming up in August there's Dan Hicks & His Hot Licks coming back to Santa Fe Brewing Company and Nick Curran & The Lowlifes will be doing a free show up in Los Alamos. I just hipped myself to Curran (Thanks, Russ Gordon!) and he's crazy great.
And in September prepare yourself for the great Barrence Whitfield! More on that later.
at July 07, 2010