I had a fascinating phone conversation this afternoon with Rick Stone, a friendly guy from El Paso who in the mid '60s was the road manager for The Bobby Fuller 4.
Rick had contacted Kyla Fairchild of No Depression, where I'd cross-posted my recent column on the new Norton Records Bobby Fuller reissue El Paso Rock, Early Recordings Volume 3. I wanted to find out what those might be and clear them up.
First a little background on Rick.
In July 1966 he'd just finished what sounds like a hellish tour with the Bobby Fuller 4. They toured in a hot and crowded truck and, as might be expected, tempers were short and tensions were high. 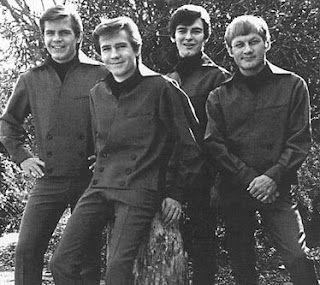 Bobby and his brother Randy, the band's bassist had gotten into a fistfight at a San Francisco Club called the Chinese Dragon. (Stone stressed it wasn't a serious fight, but something typical for young brothers.)
Bobby had decided to break up the band, Stone said. Guitarist Jim Reese had just received his draft notice. Drummer Dalton Powell was missing his wife and new baby back in El Paso. Bobby was happy about his decision, Stone said. Now he was hoping to get out from under the thumb of Bob Keene and Del-Fi Records, Stone said. "He really wanted to get away from Bob Keene."
Keene died in January.
As he's told other journalists, Stone was one of the first of Fuller's friends to arrive on the scene after Fuller's mother found Bobby's body in her car. In fact, he's told Spin magazine and others that he had crashed the night before on the couch of Bobby's apartment, just a couple of blocks from Grauman's Chinese Theatre where Bobby's mother Lorraine also was staying.
Stone said when he woke up the morning of July 18, 1966, Lorraine Fuller told him saying that Bobby hadn't come that night. At this point Stone wasn't worried. "Bobby liked women," he said.
In the Spin article, Stone said he'd thought he'd heard Fuller leaving the apartment about 2:30 a.m.
Stone told me went down to the parking lot and didn't see the silver blue Oldsmobile Bobby had been driving.
Stone said he later attended a scheduled meeting at Del-Fi Records. Other members of the band showed up, but not Bobby. On his way back to the Fuller apartment, Stone said he had a horrible feeling. Soon police cars started to pass him. Stone said deep down he knew that something terrible had happened. 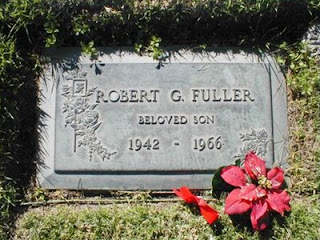 The Oldsmobile was there in a lot next to Fuller's apartment building -- not on the street, as I had written.
Bobby was inside, his head in the seat facing the back, Stone said. His face was swollen and distorted from the heat and the gasoline fumes that permeated the car. "About half of his face was black and blue," Stone recalled. The rest was reddish purple.
In Fuller's right hand was a hose, which Stone said looked as if someone had placed it there. Nearby was a gas can.
Stone denied the statement in Del-Fi Records press release I quoted that the gas can "was removed by a policeman (who apparently didn’t consider it vital to the investigation) and thrown into a nearby dumpster." He also said the gas can was on the front floor board, not in the back of the car.
Stone told me something I hadn't heard before. He said the officer there put the can in the car's trunk. But later Fuller's family and friends found not one but two gas cans in the trunk, he said. Neither were empty.
Contrary to what was said in the Del-Fi press release, Stone said he doesn't remember any dried blood on Fuller's face, which he said was too discolored to immediately tell if there was any blood.
But, Stone said, the shoes Fuller was wearing -- which were his mother's house slippers -- had marks as if someone had dragged his body.
As I said in my initial column, all these details are tantalizing, but if Bobby Fuller really was murdered as his friends and family believe, it's unlikely the killer ever will be caught.
So let's remember Bobby Fuller for his music.

I forgot to mention that Rick pointed out to me that Bobby Fuller's body was found about 250 feet away from the apartment where Janis Joplin would die four years later.
Fuller was found in a then vacant lot next to his apartment at 1776 N Sycamore Ave. in Hollywood. Joplin's apartment was at 7047 Franklin Ave.

The two singers didn't know each other, Stone said. But he pointed out that they were born about four months apart in southeast Texas and both left Texas the same year to move to California the same year.

There's a part on the corner of Franklin and Sycamore. Stone says there's no marker indicating that two famous rockers died in the area. Seems there ought to be.