Please see an update on this column HERE.

A version of this was published in The Santa Fe New Mexican
July 9, 2010

Bobby Fuller, the greatest rocker ever to emerge from El Paso, is best known for two things: his huge 1966 hit “I Fought the Law” and his mysterious death, which the police ruled a suicide though many, including Fuller’s brother and former bandmate Randy Fuller, believe it was a murder.
For several years, Norton Records has been doing its best to prove that, while Fuller might technically be a “one-hit wonder,” there was a lot more to his music than his one hit, and Fuller deserves to be known more for his music than his bizarre and shadowy death. Norton’s latest contribution to this cause is El Paso Rock, Early Recordings Volume 3. This is the first installment in that series since the mid-1990s. 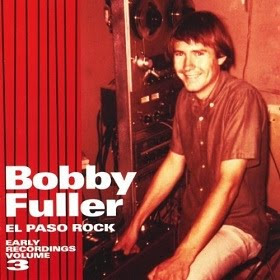 Crime scene: As an old cop reporter, there’s no way I’d be writing a column about Bobby Fuller without spending a little time on his death, so let’s get that out of the way. Fuller was found dead on July 18, 1966, inside his mother’s Oldsmobile parked in front of his apartment in Hollywood. He was 23. He died of gasoline inhalation, the police said.
A 1996 press release from his old record company, Del-Fi — which at the time was shopping the idea of a movie but only got an episode of Unsolved Mysteries out of it — described the crime scene:

“The car had mysteriously appeared after hours of searching the local area had not turned up any clues to his whereabouts. The doors were unlocked, the windows were closed tight, and no keys to the vehicle were found inside. When the first Hollywood-division police officers arrived and opened the driver’s side door, they noticed there was a book of matches on the seat beside Fuller on the front seat. An eyewitness to the gruesome discovery remembers that Fuller had traces of dried blood around his chin and mouth, and that his face and chest were bruised as if he had been beaten. Fuller’s hair and clothing were also soaked with gasoline, and his right hand still clenched a rubber siphoning-tube.
“An empty gas can, found in the back seat, was removed by a policeman (who apparently didn’t consider it vital to the investigation) and thrown into a nearby dumpster. The Olds was not dusted for fingerprints, nor was it ever impounded and searched for further clues. Members of the radio and television press at the scene were told that it looked to be a clear case of ‘suicide,’ despite much visual evidence to the contrary.”

Fuller’s family and friends have made a credible case that he was killed. I attended a panel discussion featuring Fuller’s brother Randy, singer Marshall Crenshaw, and Norton Records’ Miriam Linna at the 1998 South by Southwest Music Conference in Austin.
Fuller reportedly was depressed before he died and was planning to break up his band. A new fan of psychedelic music, he’d started taking LSD. He was hanging out with a prostitute named “Melody” (or “Melanie,” by some accounts). Some of his music-biz associates might have had ties with organized crime.
All tantalizing details, but it’s not likely that the truth about his death will ever be told.
Back to the music: There’s no question that Bobby Fuller worshipped Buddy Holly. He arranged a recording session at Buddy’s old stamping grounds, Norman Petty Studios in Clovis, in 1962 — an experience that, according to Linna’s liner notes, inspired Fuller to build a home studio. (Most of this collection comes from the Clovis session, save a few cuts recorded live at Skylanes Bowling Alley’s Little Dipper Lounge.)
“I Fought the Law” — Fuller’s version, not The Clash’s — sounded like what Buddy Holly would have sounded like in the 1960s. It’s not surprising, considering that the tune was written by Holly pal and sometimes Cricket Sonny Curtis (whose second-best-known song is “Love Is All Around” — the Mary Tyler Moore show theme). It originally appeared on a post-Holly Crickets album in 1960.
A rare early Fuller recording of “I Fought the Law” kicks off this collection. It’s nine seconds longer than the “official” version and doesn’t quite have the punch. But it’s interesting to see how Fuller played with the tune. One notable difference between the two takes: Here, the singer robs people with a shotgun, not the “six gun” we later came to know and love.
The second song on this collection, “You Made Me Cry,” sounds even more like the sainted Holly.
While Fuller’s love for Holly cannot be denied, he was apparently also a fan of rockabilly giant Eddie Cochran. On Volume 3 we find an enthusiastic cover of “Nervous Breakdown” (there are two versions included) and a live-at-the-bowling-alley medley of Cochran’s best-known songs “Summertime Blues” and “Somethin’ Else” — which I can’t listen to without thinking of Sid Vicious and his take on the song. Fuller sounds even wilder here than Sid later would.
Another live medley teams up a couple of R & B hits, Gary U.S. Bonds’ “New Orleans” (which Fuller mistakenly introduces as “Mississippi Queen”) and “Little Bitty Pretty One,” which I first came to know through Clyde McPhatter.
Probably my favorite here is “Wine, Wine, Wine,” a favorite of garage bands everywhere at the time that probably evolved from Sticks McGhee’s “Drinkin’ Wine Spo-Dee-O-Dee.” The wildest guitar work on the whole album is found here. Fuller sounds like he’s a school kid caught by a teacher while telling a dirty joke as he sings: “I know a girl, she drives a rod/She ain’t good lookin’ but she’s got a good bod.” The last word is muffled (which isn’t the case with the “Wine Wine Wine” on the previous volume of El Paso Rock).
The album ends with “California Sun,” which — considering what awaited Fuller in July 1966 — comes off as sad: “I’m going out West where I belong ...” The song fades before he can even finish the last chorus. It sounds like a premature ending ... oh, I won’t say it.
Fuller Bio Coming: There's a Bobby Fuller bio in the works by none other than Miriam Linna and Randy Fuller. Read more about that HERE